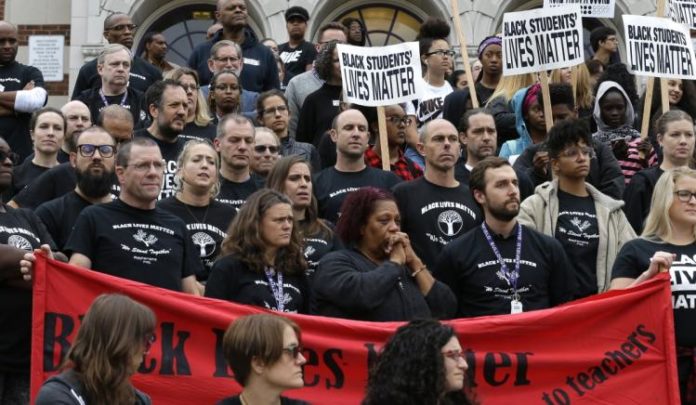 Last October, teachers in the Seattle Public Schools District planned a Black Lives Matter event that largely consisted of over 2000 teachers wearing BLM T-shirts, despite the fact that a similar event at Seattle’s John Muir Elementary in September was met with criticism, hate mail and threats of violence from racist, anti-black people.

The teachers expected backlash, and they got it, in the form of white parents from the city’s wealthier neighborhoods writing to their school principals and saying that they were displeased that such an event would take place, saying that a Black Lives Matter day was too militant, too political and too confusing for their young children, according to KUOW.

Apparently these parents, who are not able to explain to their children why black lives matter, think it is too militant to wear a t-shirt.

The complaining parents refused to speak with the news station about their racism, so KUOW made a public records request and published their emails to the schools with all identifying information redacted.

Strangely, many of the parents complaining are from “one of the whitest, most affluent” and “staunchly liberal neighborhoods dotted with rainbow yard signs that say ‘All Are Welcome’”

Some of the emails as reported by KUOW:

Wrote a parent at Laurelhurst Elementary: “Can you please address … why skin color is so important? I remember a guy that had a dream. Do you remember that too? I doubt it. Please show me the content of your character if you do.”

From Eckstein Middle School in Wedgwood: “What about red and black or yellow and white and black? How does supporting Black Lives Matter help that gap?”

And from Bryant Elementary in Ravenna: “I’m writing to share what my 9-year-old daughter told me about what she learned in class regarding the Black Lives Matter discussion. She said she ‘felt bad about being white.’ And that ‘police lie and do bad things.’”

Stephan Blanford, a Seattle school board member who is black, and whose doctoral research focused on race and public education, told KUOW, “This is what I’ve come to call Seattle’s passive progressiveness. We vote the right way on issues. We believe the right way. But the second you challenge their privilege, you see the response.”

Let us know what you think about the issue in the comments below.  Do you agree with the teachers wearing the t-shirts and their discussions or do you think some of the parents make good points? Is there a better way to address the problems?

Colorado To Use Pot Taxes To Treat Drug Addiction — INSTEAD Of Prison –...