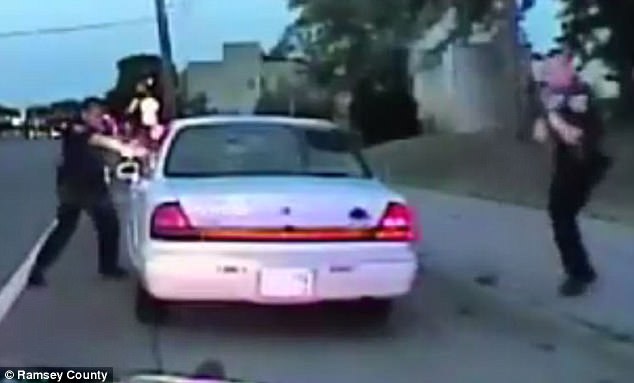 Just days after the acquittal of Officer Jeronimo Yanez for the slaying of Philando Castile, previously unreleased dash cam video has now been released showing the Minnesota police officer firing seven deadly shots into the vehicle, and subsequently- Castile. Castile, fully compliant, and even telling the officer he had a weapon,  reached for his documentation requested by Yanez but found himself murdered in cold blood inform of his girlfriend and step-daughter. It was a mostly white jury that found Yanez not guilty of manslaughter on Friday. While the whole incident was live streamed on Facebook by Castile’s partner has long since been widely available, the new dash footage has conveniently only been made public after the officer’s name has been cleared.

Castile, a 32-year-old black father, was shot by the officer as he sat in his car pulled over at the side of the road in St Anthony, Minnesota, last July and later died.

His girlfriend live streamed the aftermath on Facebook and her footage, which showed Castile slumped over and bloodied, went viral.

Reynolds’ footage, which was released on Tuesday, shows what happened in the crucial seconds before the shooting and lays bare how he fired his weapon within seconds of Castile announcing: ‘Officer, I do have to tell you that I’ve got a gun.’

Immediately, Reynolds drew his own weapon and pointed it in the car. ‘Don’t reach for it then!’ he shouted, before firing his first round as Castile’s four-year-old daughter sat in the back seat.

The squad-car footage shows a wide view of the traffic stop and the shooting, with the camera pointed toward Castile’s car.

It captures what was said between the two men and Yanez, who is Latino, firing into the vehicle. What happened inside the car can’t be seen.

What occurred in the vehicle, has however been documented by the Facebook livestream posted by Castile’s partner- showing nothing but compliance on Castile’s part.

The video shows Yanez following Castile’s car, then pulling it over before he can be seen approaching the car and asking for a driver’s license and proof of insurance.

Castile gives the proof of insurance to Yanez through the driver’s side window, and Castile puts it in his pocket. Castile is then heard saying, ‘Sir, I have to tell you, I do have a firearm on me.’

Castile, a 32-year-old elementary school cafeteria worker, had a permit to carry the weapon.

Before Castile finishes that sentence, Yanez has his hand on his own gun and is pulling it out of the holster. Yanez says, ‘OK. Don’t reach for it then.’

There is shouting, and Yanez screams ‘Don’t pull it out!’ before he fires seven shots into the car.

Castile’s body is thrown to the right after the first shot. Yanez’s backup, Officer Joseph Kauser, can be seen standing on the passenger side of the vehicle, jumping back and retreating when the shots were fired.

Yanez continued to shoot while Castile sat helpless and wounded by the first shot, obviously posing no threat to the officers or others.

After the shooting, Yanez can be seen standing at the car window, with his gun drawn for some time.

Reynolds’ then-4-year-old daughter starts to get out of the car and is grabbed by an officer. The video then shows help arriving at the scene.

Officers direct Reynolds out of the car. Yanez is led away while officers pull Castile from the vehicle and begin CPR.

Yanez is then off-camera, but can be heard talking through his body microphone.

Yanez, 29, is heard telling a supervisor that he didn’t know where Castile’s gun was, then saying that he told Castile to get his hand off it. Yanez testified, ‘What I meant by that was I didn’t know where the gun was up until I saw it in his right thigh area.’

The 12-member jury, 10 of whom were white, deliberated for five days before announcing their decision on Friday afternoon.

Last Wednesday they told the judge they were deadlocked, and he sent them back to continue deliberation.

Unsurprisingly, justice has not been served in this case. Why is it that more incriminating evidence of Yanez’s guilt is only released after his name is cleared. Considering the history of litigation against murderous law enforcement killing Black men in America, why would justice have been served? Verdicts like these are the catalyst for movements like Black Lives matter to fight for the civil rights for the people of color in America. As often asked- if it was systemic racism that created these killings at the hands of law enforcement, why would the same system provide justice?

Navajo Water Supply Is More Horrific Than Flint, But No One Cares Because They’re...

UK Police Announce There Are So Many Pedophiles, They Will Stop Arresting Them –...