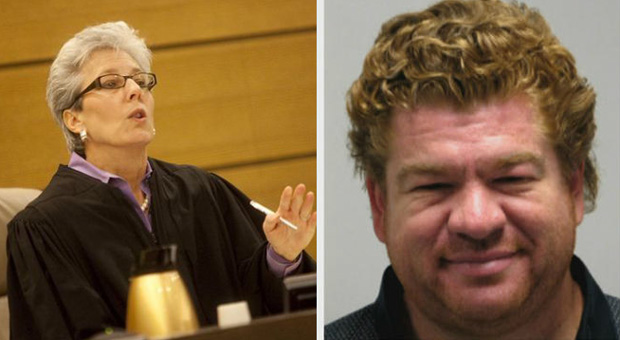 The wealthy heir to the du Pont family fortune, Robert H. Richards IV, was found guilty in court of raping his 3-year-old daughter but was let off by the judge who said “he wouldn’t fare well in prison”, according to released court records.

Judge Jan Jurden decided that the Elite pedophile needed treatment rather than prison time saying that he had “unique circumstances” despite further accusations that he’d also sexually abused his toddler son.

Her puzzling rationale was based on her own observation that prison life would adversely affect Richards.

Several criminal justice authorities in Delaware said that her view that treatment was a better idea than prison is a justification typically used when sentencing drug addicts, not child rapists.

Delaware Online reports: Richards’ 2009 rape case became public this month after attorneys for his ex-wife Tracy filed a lawsuit seeking compensatory and punitive damages for the abuse of his daughter.

The fact that Jurden expressed concern that prison wasn’t right for Richards came as a surprise to defense lawyers and prosecutors who consider her a tough sentencing judge. Several noted that prison officials can put inmates in protective custody if they are worried about their safety, noting that child abusers are sometimes targeted by other inmates.

“It’s an extremely rare circumstance that prison serves the inmate well,” said Delaware Public Defender Brendan J. O’Neill, whose office represents defendants who cannot afford a lawyer. “Prison is to punish, to segregate the offender from society, and the notion that prison serves people well hasn’t proven to be true in most circumstances.”

O’Neill said he and his deputies have often argued that a defendant was too ill or frail for prison, but he has never seen a judge cite it as a “reason not to send someone to jail.

“Richards was no frail defendant, court records show, listing him at 6 feet, 4 inches tall and between 250 and 276 pounds. Nor do court records cite any physical illnesses.

O’Neill said the way the Richards case was handled might cause the public to be skeptical about “how a person with great wealth may be treated by the system.

“Richards, who is unemployed and supported by a trust fund, owns a 5,800-square-foot mansion in Greenville he bought for $1.8 million in 2005. He also lists a home in the exclusive North Shores neighborhood near Rehoboth Beach, according to the state’s sex abuse registry. His great-grandfather is du Pont family patriarch Irenee du Pont, and his father is Robert H. Richards III, a retired partner in the Richards Layton & Finger law firm.

Jurden, who has been a judge since 2001, and Superior Court President James T. Vaughn Jr. did not respond to questions last week about the case.

Deputy State Court Administrator Amy Quinlan said in an email that judges must consider the charges, state sentencing guidelines and “any mitigating or aggravating factors and recommendations” from prosecutors, defense lawyers, corrections officials and others. “That procedure was followed in this case as well.

“The lawsuit filed by Richards’ ex-wife accuses him of admitting to sexually abusing his infant son between 2005 and 2007, the same period when he abused his daughter starting when she was 3.

Police said they investigated allegations involving the boy in 2010 after his mother filed a complaint, but said they did not have sufficient evidence to justify charges. Investigators will take another look at the allegations included in the lawsuit, which are based on reports by probation officers.

Attorney General Beau Biden’s office had initially indicted Richards on two counts of second-degree rape of a child – Class B violent felonies that carry a mandatory 10-year prison term for each count.

According to the arrest warrant filed by a New Castle County Police Detective JoAnna Burton in December 2007, the girl, then 5, told her grandmother, Donna Burg, that Richards sexually abused her.

Burg said the child reported that her father told her it was “our little secret” but said she didn’t want “my daddy touching me anymore.” The girl said her father molested her in the bedrooms of her mother and brother in the mansion at 10 Summit Lane near Winterthur Museum, the arrest warrant said.

Tracy Richards, who confronted her then-husband, told police he admitted abusing his daughter but said “it was an accident and he would never do it again,” the warrant said.

Richards was free on $60,000 secured bail while awaiting trial on the charges that could have put him behind bars for years.
But in June 2008, just days before a scheduled trial, prosecutor Renee Hrivnak offered Richards a plea to a single count of fourth-degree rape, which carries no mandatory time, and he accepted, admitting in court that he abused his child.

“It was more than reasonable, an enlightened plea offer,” Richards attorney Eugene J. Maurer Jr. said.Probation offeredFourth-degree rape is a Class C violent felony that by law can bring up to 15 years in prison, though guidelines suggest zero to 2½ years in prison.

At his February 2009 sentencing, Hrivnak recommended probation, Biden’s chief deputy Ian R. McConnel said, adding that in retrospect he wished she would have sought prison time. Hrivnak would not comment.

Biden spokesman Jason Miller said the attorney general – who routinely hails the prosecution of child predators as a top priority for his office – did not know about the case.

Miller said only Hrivnak and her supervisor, Allison Texter, were part of the decision on how to resolve the case. Texter, who is now in private practice in Wilmington, did not return calls for comment.

State Prosecutor Kathleen M. Jennings could not discuss the case, McConnel said, because she had represented Richards while he was on probation. Jennings, a former chief deputy attorney general, rejoined the office in November 2011 after about 15 years in private practice. She would not say when she represented Richards.

McConnel would not discuss the rationale behind the Richards’ plea deal and Hrivnak’s recommendation of probation for the fourth-degree rape conviction.

He noted, however that prosecutors handling child sex cases routinely have difficulty relying on the testimony of youngsters, especially if the defendant is their father. The well-being of the child is paramount in such cases and parents and prosecutors are often reluctant to put children through the trauma of testifying and being cross-examined, he said.”These cases are extremely complicated and difficult and we strive to do justice in each and every case to the best of our ability given the facts and circumstances presented,” McConnel said. “That sometimes results in a resolution that is less than what we would want.”

‘Will not fare well’

While judges have the latitude to sentence defendants within legal parameters, they are urged to follow more lenient guidelines established by the Delaware Sentencing Accountability Commission, a panel of judges and other top officials in the criminal justice system. The panel, known as SENTAC, has a policy that prison should be reserved for violent offenders, including rapists.

Jurden gave Richards, who had no previous criminal record, an eight-year prison term, but suspended all the prison time for probation.

“Defendant will not fare well in Level 5 setting,” said the final line of her sentencing order. In Delaware’s correctional system, Level 5 is prison.

Joseph S. Grubb, chief New Castle County prosecutor, said he was not involved in the case, but stressed that whether Richards’ might suffer or thrive in prison was not something prosecutors considered.

“It’s not a concern for us,” Grubb said. “We try to do the right thing in each case. Absent that equation is the physical condition of the defendant.

“Grubb said he did not know “how the judge gathered” that Richards might have trouble in prison, but assumed the presentence report included information she used. That report was not available in the court file.

O’Neill, the public defender, said that while Jurden’s rationale surprised him, “I commend her for making such a courageous ruling. When I find the appropriate place, I’m going to make that argument.

“Defense lawyer Michael W. Modica said he has argued that clients should be spared prison because of medical or mental issues, but judges routinely reject the suggestion. He said he recently persuaded a prosecutor not to recommend prison for a client who had cardiac bypass surgery while awaiting sentencing for a DUI, and the judge sentenced the man to home confinement.

“I’ve never heard of the judge saying in general that he is not going to do well,” Modica said. “Who thrives in jail?”

Jurden also ordered Richards to “participate in a sex offenders” treatment program after his lawyer provided her with an evaluation from a clinic in Massachusetts. Her order stipulated that he undergo inpatient treatment followed by outpatient treatment. The judge also ordered him to have no contact with children under 16 and prohibited him from possessing pornography.

Jurden’s order also included other mitigating circumstances considered before sentencing, citing his “strong family support” and “significant treatment needs which must be met.” The order noted, “Treatment needs exceed need for punishment,” which the SENTAC manual lists as a factor for judges to consider.

Attorneys said a treatment sentence is more common for first-time drug offenders, drunk drivers and the mentally ill, but is not unheard of for sex offenders. “It’s not completely out of left field that a judge would say that,” Grubb said.

Prosecutor Josette Manning, who spent six years in the sex crimes unit, said juvenile offenders in Delaware are often sent to out-of-state treatment facilities rather than a detention center. Some adults can get sex treatment in prison, she said, but when an offender can afford to pay the cost of inpatient treatment themselves, judges sometimes make that part of the sentence instead of prison.

“It’s absolutely appropriate for a judge to consider a defendant’s treatment needs during sentencing” for sex crimes, Manning said.

County police chief Elmer Setting said that while police can’t control how attorneys and a judge resolve a case, “In serious situations where we have a guilty plea, we hope for prison time.

“Kendall Marlowe, executive director of National Association for Counsel for Children, said the bottom line is that individuals who abuse youngsters deserve to be punished.

“Child protection laws are there to safeguard children, and adults who knowingly harm children should be punished,” said Marlow, whose nonprofit agency assists lawyers who handle child welfare cases.

“Our prisons should be more rehabilitative environments, but the prison system’s inadequacies are not a justification for letting a child molester off the hook.”

Defense lawyer Joseph A. Hurley said it makes sense to him that the judge would be concerned about Richards’ time in prison.

“Sure, they have protective custody, but that is solitary confinement for 23 hours a day. We’re not a third-world society,” Hurley said.

“Sex offenders are the lowest of the low in prison,” Hurley said. “He’s a rich, white boy who is a wuss and a child perv. The prison can’t protect them, and Jan Jurden knows that reality. She is right on.”