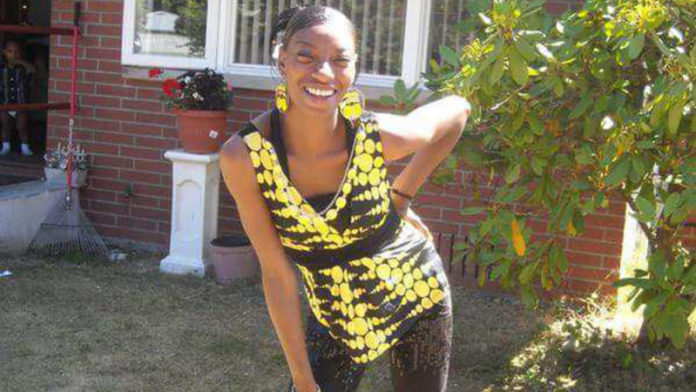 Hot on the heels of officer Jeronimo Yanez’s acquittal for killing Philando Castile, another casualty is added to the list of Black lives lost too soon at the hands of overzealous law enforcement.

During the early hours of Sunday morning, pregnant young mother of four- Charleena Lyles called police to report a burglary at her transitional housing for homeless families in Seattle. What started out as a call for help ended up in Lyle’s death at the hands of two white police officers. While the report of burglary seemed typical, there were notes on file about the address that had the responding officers on high alert. Lyles is known to friends and loved ones as having battled with mental illness- and police claim that they opened fire upon Lyles when she presented herself with a knife, as they felt threatened by her. Audio from police dashcams has since been released showing how law enforcement knew Lyles had mental health issues and that they knew there were multiple children in the home, yet still took no precaution to these facts when answering the distress call.

In a statement, Police Detective Mark Lyles wrote, “Although this was a typical burglary report, two officers were required due to information pertaining to this address that presented an increased risk to officers.”

KIRO7 News reports that the police officers knew Lyles, so they sent two police officers because they were “concerned for their safety”—which is understandable, considering the threat of the undersized, petite woman whom family members called “tiny” and said “weighs, like, nothing soaking wet.”

However, police officers said that when they arrived at the fourth-floor apartment, Lyles confronted them with a knife, causing them to open fire on her, even though there were several children in the apartment with her.

The police have issued few details, but using The Root’s proprietary algorithm for police shootings of black people, we can predict exactly what will happen next:

Family members say that the victim was receiving counseling for mental-health issues. Lyles was also the subject of a 2008 news story about how she had entered a program for at-risk youths, using it to get off welfare and get a full-time job.

Seattle Mayor Ed Murray has promised a full investigation, and Lyles’ family is demanding answers to questions such as:

The Seattle Police Department has remained mum, but again, our algorithm has already deduced the answer to all of these questions:

The two officers—an 11-year veteran and a “newer” officer—have been placed on paid leave. The Seattle Times, the Seattle Patch and KIRO7 News have all reported on Lyles’ criminal record.

Seattle police have released audio of the police shooting that ended with Charleena Lyles dead in front of her children. The audio, linked to dashboard cameras in the two patrol cars responding to the initial call, is redacted in certain areas, according to the Seattle Times.

The officers can be heard discussing Lyles’ previous calls to police and her mental-health issues. One officer says that Lyles began “talking all crazy about how the officers weren’t gonna leave,” while another asks if she had a “mental precaution on her.” The officer responds that she has an officer-safety precaution on file.

The recording reveals that officers were aware of Lyles’ mental-health issues and the fact that children might be in the home before they opened fire in the apartment. One officer asks, “Wait, is this the one with, like, the three kids?”

“Yeah,” the other officer responds. “Yeah, so this gal is the one who was making all the [inaudible] statements about how her and her daughter were gonna turn into wolves.”

The woman, presumably Lyles, allows officers to enter, and she explains the break-in to the cops. The children can be heard in the background as she answers questions. The conversation seems civil as she lists the items missing, and then the officers yell “Get back!” approximately 11 seconds before gunshots are heard.

According to the Seattle Times, one of the officers mentioned scissors in an unreleased portion of the audio.

Take a listen to the audio. Do you think the officers reacted appropriately? If not, do you think that justice will be served for Lyles, considering the terrible track record law enforcement has in upholding the law when it comes to prosecuting their own? Share your thoughts in the comments below.