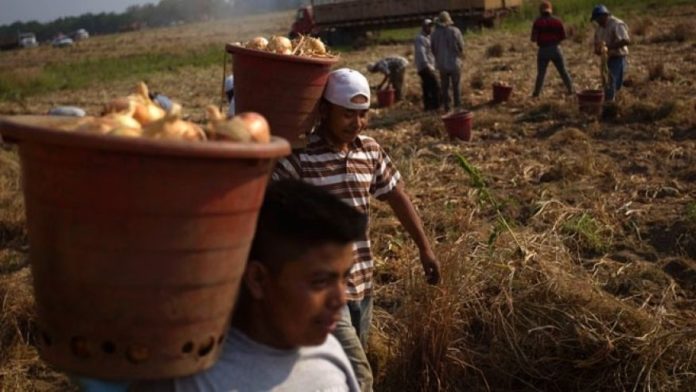 It is not just California farmers that are losing their workers due to round ups and deportations of undocumented workers. Trump voting farmers in Kansas are now concerned by his widespread deportation of their workers.

“The threat of deportation and the potential loss of our workforce has been very terrifying for all of us businesses here,” Trista Priest, chief strategy office for Cattle Empire, a massive cattle operation that overwhelmingly employs Latinos, reported Bloomberg.

Seventy-seven percent of people in county where Cattle Empire operates voted for Trump, but Priest and others “complained that the immigration policies emanating from Washington, 1,500 miles away, clash with the needs of local businesses.”

“Two weeks ago, my boss told me, ‘I need more Mexicans like you,’” a young Latino farmhand told Bloomberg. “I said, ‘Well, they’re kind of hard to find.’”

As border apprehensions have decreased 47 percent from this time last year, more undocumented immigrants already in the states are more concerned about their immigration status than ever before, reported Raw Story.

As Trump continues to push his executive orders increasing deportations, industries like agriculture and construction that employ a lot of immigrants realize his policies don’t leave a path to citizenship for undocumented people working and living crime-free in the U.S. The path is only there for those with plenty of time and money.

“The visa system is so slow and so expensive,” Joe Jury, an Ingalls, Kansas farmer who employs Latinos told Bloomberg. “The government has dug this hole, and now they’re trying to dig themselves out through enforcement.”

A better alternative would be to make a path to citizenship for those hard working immigrants who have no way to be “legal”.

White Couple Adopted 2 Black Daughters To Kill Them “We Beat Them To Death...