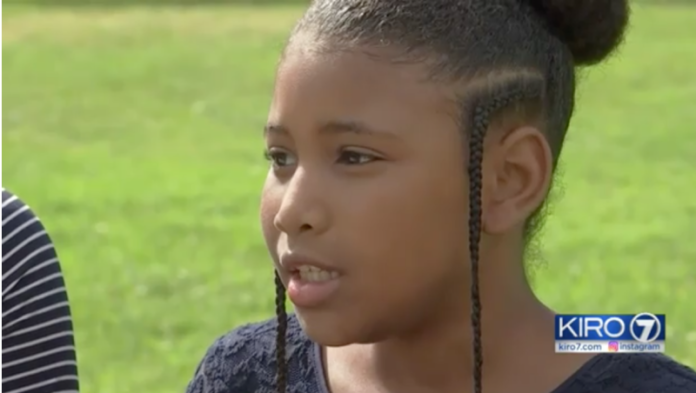 A Washington fourth-grader, who has been the subject of racially motivated bullying, is using social media to bring attention to her case after she and her parents say school administrators and teachers basically ignored the abuse the girl had to endure.

KIRO reported 9-year-old Nasir Andrews said she began to feel desperate after months of telling teachers and administrators and even the school district about her situation at Ardmore Elementary School.

The girl said students called her names like “Nutella” and “servant” and have physically bullied her throughout the school year, and none of the adults at the school will help.

“A student called me ‘Nutella’ and I told my after-school teacher and she said it wasn’t racist and she made me write the definition of racist,” Nasir told KIRO.

The little girl was also picked on for getting the reduced-price lunch, with students calling her homeless and poor. She was also laughed at on the school bus. Her parents tried to help her, getting her a lunch box and letting her bring her lunch on some days, and even starting to drive her to school every day, but the bullies didn’t let up. Some children would even take her snack and eat it or throw it away. And at recess, the other kids even got physical, with students hitting her or pushing her and even choking her, according to the report.

“Everybody in my class does not like me and I don’t have any friends in my class or in the other fourth-grade classes,” Nasir said.

One day, the 9-year-old even found a drawing in her cubby depicting guns shooting out bullets with the words “die, die, die” on it.

Her parents, Chantey and Travis Andrew, grew increasingly agitated and upset about the situation, noting that Nasir had never had issues making friends before moving to Bellevue, WA from Georgia last summer.

“It was very disheartening. It really took me by surprise to hear some of those words,” Travis Andrews said.

“Our fear is there is a culture that has been established at the school where it is almost OK for the children to exercise different forms of treatment and bullying and harassment,” Chantey Andrews added. “And there’s not a conversation being had with them saying, ‘No, this is unacceptable.’”

So they went to Facebook to get the message out. In the video posted on Chantey Andrews’ page, Nasir doesn’t speak, but instead holds up cards sharing bits of her story.

“I think that we need to stop bullying and just know that if you’re doing it, you’re hurting people,” Nasir said.

The family said that the district did investigate but said that in most instances, the incidents were jotted down as “unfortunate peer to peer interaction.”

“I wish they would have paid more attention to the bigger picture. I think a lot of the incidents were taken individually and handled individually and if it was more of a broader picture, and they were able to connect more of the dots, we would have probably stopped this earlier in the year,” Travis Andrews said.

Nasir is one of about 40 black students at Ardmore, which has large populations of Hispanic, Asian and Indian students.

The school district has released an additional statement about Nasir’s case, saying, “We are very concerned about the well-being of all of our students. We can assure you that district and central office leaders continue to work with the family to ensure that their daughter and every student at Ardmore is receiving the support they need. The harassment, intimidation and bullying of any student is unacceptable. In the case you referenced, an investigation into the allegations has been in process.”

Nasir’s family wants to find a safe school where Nasir can be safe and learn.

Texas Lawmaker Introduces Bill To Put Women In Prison For Having An Abortion –...

U.S. Air Force Is Spraying 6 Million Acres With Chemicals in Response to Harvey