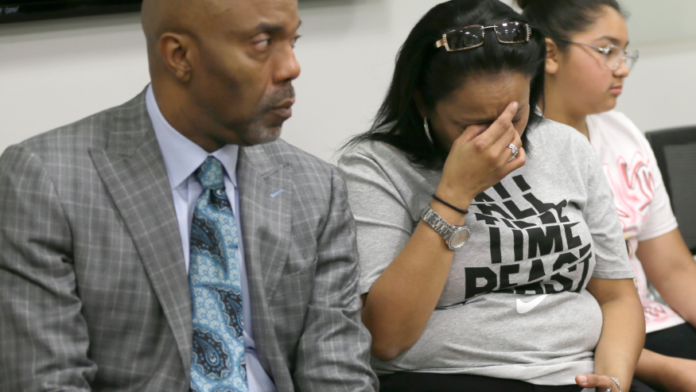 A Dallas police officer will face aggravated assault charges for firing into a moving car at least 13 times and killing a 21-year-old woman.

Dallas police officer Christopher Hess, 39,  has been placed on administrative leave pending an internal affairs investigation into the death of Genevive Dawes, reported The Guardian.

The charges are from a Jan. 18 incident when Hess responded to a suspicious person call at an address near downtown Dallas. They found Dawes and Virgilio Rosales, her partner, sleeping in a Dodge SUV she had purchased a month earlier, according to a federal lawsuit brought against the city by Dawses’ mother, Mary Dawes.

The vehicle had been reported stolen, though Dawes did not know this and thought she had purchased it legitimately, the court filing states. It adds that when the officers approached the SUV with flashlights, Dawes was startled and tried to reverse the car. A police vehicle drove into her path, causing a minor collision.

The lawsuit states: “Dawes still unaware of what was going on or who was blocking her path, pulled her vehicle forward so she could have a clear path to back up. As Dawes backed up her vehicle at a very slow rate of speed, defendants Hess and Kimpel fired at least 13 shots through the passenger side window, striking Dawes four times in the neck, her right tricep, left arm, upper left chest and right forearm.

“Dawes’s right earlobe was also partially amputated. Dawes was transported to Baylor Hospital where she later died as a result of her injuries,” the Guardian also noted.

Daryl Washington, an attorney for the Dawes family, disputes that version of events, saying the car was moving at less than 5mph and not accelerating.

“We are happy that there may be some justice in this case because the death of Genevive was definitely preventable,” Washington said. He also noted that the charge against Officer Hess carries a prison sentence of 5-99 years.

No body camera footage has been released to the public, but that should provide an up close look at whether or not the officer was justified in shooting up the car and killing the woman.

Unfortunately we have all seen this many times recently, and we know the officer will likely face no actual consequences for his crimes.