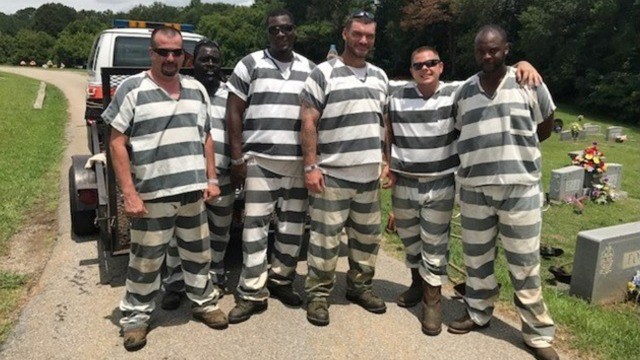 Criminals serving custodial sentences are often seen as the bottom feeders of society. Seen as those who have “done the crime” and now must “do the time”, little mercy is every shown to those in custody but in the following story, six inmates who did the right thing are being rewarded for their efforts. Six Georgia inmates who could have fled for freedom who instead stayed behind to tend to the deputy keeping watch over them when he collapsed are being hailed as heroes. As a reward, they have seen their sentences shortened.

The Georgia deputy, who has asked not to be identified, already wasn’t feeling well when he went out on a work detail with the inmates at a cemetery. It was 76 degrees out, with 100% humidity, conditions which he believes aggravated the condition.

“I started coughing spells, and every time I got those, I’d get hotter,” the deputy said. “It was just harder to keep up…I just finally went down after a couple of minutes doing that.”

“Once I actually went down, I was already in one of my hyperventilating spells,” he continued. “So at that point, I was just trying to breath. I really wasn’t thinking much, but just trying to get everything under control.”

But the inmates acted quickly, opening his shirt to take off his bulletproof vest to administer CPR while one of them took the deputy’s cell phone to call 911.

“None of my guys ran,” the deputy, who said he had been out often with the group and considered them to be friends, said. “None of them did anything they shouldn’t have done.”

The inmates were praised for their heroic efforts, and Polk County Sheriff Johnny Moats said that he would be reducing all of their sentences by about one-fourth.

“Anytime we have a trustee or inmate crew, that goes beyond normal duties, we cut them some extra time off,” Moats said.

Do you think the shortened sentences were well deserved? Or do you think nothing should have been awarded as to that is what would be expected of anyone to do? Share your thoughts in the comments below.