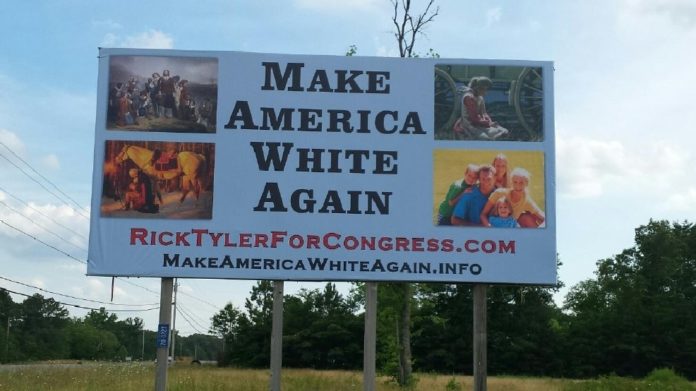 Rick Tyler, an Independent running in the 3rd District, including the city of Chattanooga, is under fire for his racist version of Trump’s campaign slogan, “Make America Great Again.”

Many already believe that Trump wants to make America a white Christian country, based on his prejudice hate speech and slanders against minority racial and religious groups. Another reason people believe this is because of his failure to speak against acts of terrorism as long as they were committed by white Christians, while immediately tweeting about terrorism in Europe when the terrorist is perceived as Muslim or non-white.

“There’s no room for this type of hateful display in our political discourse,” local Republican Party honcho Ryan Haynes said in a statement. “Racism should be rejected in all its heinous forms in the Third Congressional District and around the country.”

There has been no response from the Trump campaign regarding the racist, unconstitutional ideology. But by Thursday the offending billboards located near Benton, Tennessee were taken down down after outraged residents complained, according to NBC.

Tyler insisted he had no hatred in his heart for “people of color.” He said he just wants America to go back to a “1960s, Ozzie and Harriet, Leave it to Beaver time when there were no break-ins; no violent crime; no mass immigration.”

Tyler seems to have admitted he believes that minorities are to blame for the terrible economic problems caused by the rich white people running the US.

In a radio ad posted on Tyler’s website he said “the Caucasian race… the architects and progenitors of advanced civilization and high cultures.”

Tyler’s views on Trump seem conflicted, however. In blog posts on his website, Tyler calls Trump “latest stalking horse entity to be foisted upon the American electorate” — but also an inspiration.

“His advocacy of a “temporary ban” on Muslim immigration and the construction of a wall on the Southern border have created a climate conducive to conversation relative to the elephant in the living room no one wants to talk about … namely, the urgent and vital subject of race,” Tyler wrote.

Racists like Tyler need to be afraid again, it is way past time for his prejudice anti-constitutional hate rhetoric to be accepted.

As Americans Fatter Than Ever, World Faces Worst Starvation Crisis Since WWII – Anti...