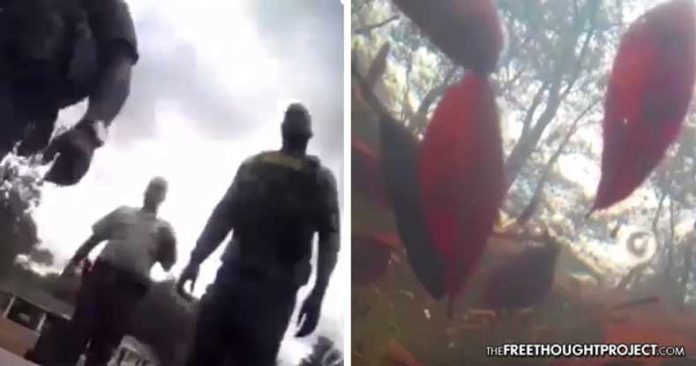 Chatham, GA — A Georgia man’s personal body camera footage is the only evidence being publicly released showing his alleged assault by Chatham sheriff’s deputy Franklin R. Rollins Jr. Luckily for the victim, Anthony Oliver, his body camera is waterproof and survived being thrown into a nearby pond by the deputy seemingly covering up his crimes.

The incident happened on January 23 of this year and all stemmed from an alleged clerical error for an $81 fine. According to Oliver, he was attempting to deliver a puppy at 9 a.m. that morning when a man in a black truck rammed him from behind causing “extreme” damage to his car.

When Oliver got out of his vehicle to assess the damage and talk to the person who hit him, he says that man pulled a gun and never identified himself. Oliver then jumped back into his car and called 911 as the armed man in the black truck began chasing him.

The call is recorded on Oliver’s body camera. As he’s reporting to 911 dispatch that a man is following in an unmarked black truck, the dispatcher told him not to pull over while she checked to see if police might be following him.

Oliver then turned on his emergency flashers and began driving slowly. After a few minutes, the dispatcher told him that the black truck belonged to deputy Rollins who was acting as a US Marshall at the time.

Oliver immediately began to pull over but wasn’t entirely stopped before Rollins rammed his vehicle again, this time, totaling it.

According to Oliver, multiple deputies then surrounded him and stood by as Rollins kicked him with steel toe boots — breaking his jaw.

When the incapacitated Oliver is sat up on the road, after the alleged assault — Rollins is seen ripping the body camera from his chest and throwing it into a nearby pond.

The video ends as the camera slowly sinks below the water.

As Savannah Now reports, Oliver noted that the entire reason for the stop was erroneous as he had a set court date for the warrant over an $81 traffic fine.

Oliver, 35, was arrested on a California warrant for missing an $81 payment on a drunken driving fine. Oliver said he already had been arrested twice on the same warrant regarding the $81 fine, spending about two weeks in the Chatham jail each time.

Oliver said he was late paying the fee because he was busy moving and dealing with Hurricane Matthew and it slipped his mind.

He said he had a court date of Feb. 13 on the issue and didn’t know there was a warrant for his arrest on the same topic on Jan. 23.

“The video proves he (Rollins) was angry and it proves that he had something to hide,” said Craig Bonnell, Oliver’s attorney. “If there had been no misconduct, why get rid of the camera?”

The multiple other police dash cameras on the scene most assuredly recorded everything that transpired. However, police have yet to release any of it.

“If Effingham can’t or won’t produce that video, it almost doesn’t make a difference,” Bonnell said. “It won’t to a jury.”

To add insult to erroneous assault and deprivation of rights, the $3,500 English bulldog puppy that was Oliver’s reason for being on the road that morning was allowed by police to be taken from Oliver’s car.

After nine hours locked in a cage for an $81 fine, and repeatedly asking for medical attention, Oliver was finally brought to the St. Joseph’s/Candler Hospital where he says he was treated for a broken jaw and back.

Naturally, Chatham Sheriff John Wilcher is denying the assault, the throwing of the body camera (despite it being seen on video), and the puppy, saying that Oliver has “mental issues.”

According to Savannah Now, the lawsuit in U.S. District Court is against Rollins, Chatham and Effingham counties, their sheriffs and 10 unidentified law enforcement officers who were on hand during the arrest. It asks for compensatory and punitive damages, legal fees, additional training of law enforcement officers, an FBI criminal investigation and federal grand jury indictments on civil rights violations.

By: Matt Agorist  From: The Free Thought Project

Man On Life Support After Being T-Boned By Speeding Police Car With No Lights/Sirens...