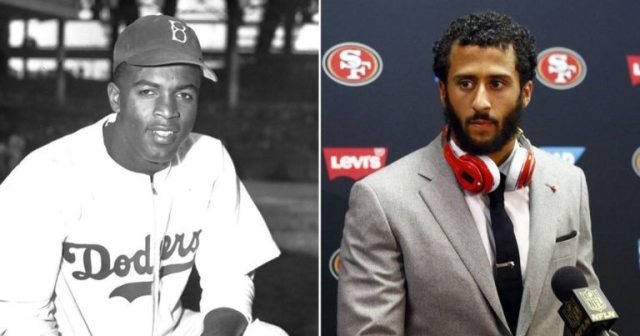 Colin Kaepernick’s principled stance, rather kneel, has continues to draw more attention currently, but he isn’t the only athlete that has refused to stand or salute the American national anthem. It can be traced back to Robinson.

Robinson remains an activist and a barrier-breaking athlete when he was the first Black player to play in Major League Baseball. But he realized that he resides in a white world as a black man.

In his own words Jackie Robinson said, “I cannot stand and sing the anthem. I cannot salute the flag; I know that I am a black man in a white world.”

Colin has doubled down over the action he took for not standing and “respecting” the flag or the anthem. This action has made white Americans lose their minds over the action and for they they believe to the be the disrespect to those that served a nation…no matter how misguided this viewpoint might be to us in the Black community.

The Black community has a deep history and tradition of athletic activist such as Muhammad Ali in 1966. He rejected the idea of serving in the Vietnam War on the basis that he shouldn’t fight for a country that routinely denies him the rights of the rest of it’s citizens.

At the 1968 Olympics in Mexico City, John Carlos and Tommie Smith also raised their Black power fist while standing on the podium receiving their Gold and Bronze medals. In fact, their friend named Peter Norman stood by them in solidarity when the event occurred.

In 1995, Mahmoud Abdul Rauf also refused to stand for the anthem and recognize the presence of the flag. Despite being a damn good point guard and the leagues most prolific free throw shooter, Abdul Rauf was quickly black-balled from the NBA.

The spirit of racism has grown high in the nation and will continue because White America refuses to face it’s demons and deal with the fact they are treating their fellow citizens of color as second, even third class citizens.