Home News The Sand Creek Massacre Is One Of The Most Heinous Atrocities Tn... 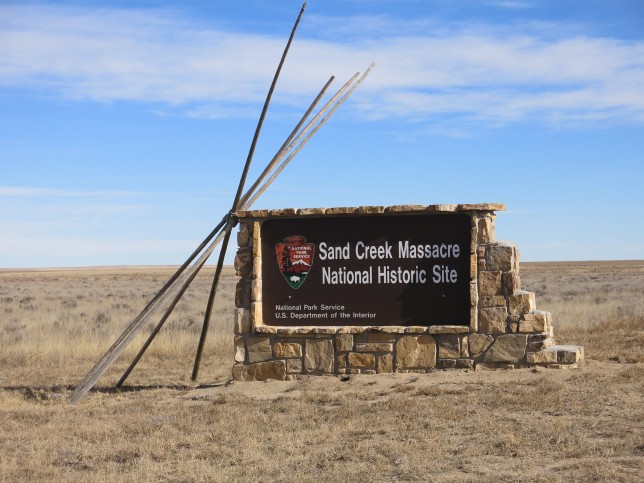 This Date in Native History: On June 27, 1864, John Evans, governor of the Colorado Territory in Denver, issued a proclamation “To the Friendly Indians of the Plains,” a step that initiated a series of movements among the Native peoples that would bring 600 to 700 Arapaho and Cheyenne people for a peaceful encampment near the bend in the Sand Creek River.

This would become the setting of one of the most heinous atrocities in U.S. history—the Sand Creek Massacre—the murder and mutilation of 160 to 200 women, children and elders by civilian and military troops on November 29, 1864.

In the June proclamation, Evans warned the “friendly Indians” about not associating with those of their tribes who have “gone to war with white people.” He encouraged those friendly to the whites to identify themselves by congregating in specific approved locations, sometimes for further instructions and relocation: Kiowa and Comanche people to Fort Larned in Kansas; the Arapaho and Cheyenne along the upper Platte River to Camp Collins (today’s Fort Collins) on the Cache-la-Pondre River; the Lakota people to Laramie, Wyoming and the Arapaho and Cheyenne people living on the Arkansas River were directed to go to Maj. S.G. Colley, the U.S. Indian agent at Fort Lyon. All were told they would be given provisions and safety.

Less than two months later, Evans would issue another proclamation—this one authorizing the citizens of the Colorado Territory to “kill and destroy as many enemies of the country, wherever they may be found, all such hostile Indians” and to take the Native property as reward. He followed up with creation of a 100-day civilian regiment, under command of Civil War veteran Col. John Chivington, to “pursue, kill, and destroy all hostile Indians that infest the plains.”

While the June 27 proclamation set into motion that year’s events leading to the November massacre, the true setting of course occurred more than a decade earlier. Almost immediately after the signing in 1851 of the Fort Laramie Treaty, which reserved for the Arapaho and Cheyenne the legal right to the wedge of land between the South Platte and Arkansas rivers, encroachments by white prospectors and then settlers began.

Already weakened by dwindling buffalo herds and lack of other food sources, and battling imported diseases such as cholera and small pox, the Plains people of the region were cheated with smaller than agreed upon U.S. annuity payments negotiated by the tribal chiefs to help the transition from the broader hunting ranges.

Discovery of gold along the Platte River in 1858 launched a rush of white prospectors and an entourage of those catering to them—all in violation of the treaty, which was not enforced by the U.S. government. This year also saw planting of the settlement that became Denver, named for James William Denver, governor of the Kansas Territory and one of the businessmen who funded the founding of the city. Denver was started within the Cheyenne and Arapaho’s territory despite the 1851 treaty being reaffirmed by the U.S. Congress in the Kansas-Nebraska Act of 1854.

For a time, Native communities continued to hold ground as settlers moved in around them, but in 1860 some women and children from an Arapaho village were raped by white men from a neighboring town while the village men were away hunting. No charges were made, but Chief Left Hand relocated his people, according to Carol Turner in her book, Forgotten Heroes and Villains of Sand Creek.

In 1861, chiefs were forced to renegotiate and the Treaty of Fort Wise restricted the Arapaho and Cheyenne people to land between the Arkansas River and the Big Sandy (or Sand) Creek. Between 1862 and 1864, there were additional violent encounters between Native peoples and the white settlers and soldiers including a number of raids for livestock by Arapaho, Cheyenne and Kiowa men.

Tensions and violence heightened in 1864. In April during an exchange of fire between U.S. troops and Cheyenne soldiers, two of the troops were killed and four of the Cheyenne soldiers wounded, according to History Colorado.

On May 16, U.S. troops commanded by Lt. George Eayre approached an encampment of Cheyenne people led by Chiefs Black Kettle, Lean Bear and Star. The village was in what is today Kansas.

When Lean Bear and Star, displaying a peace medal and documents from President Abraham Lincoln, tried to speak with the troops, they were gunned down, Turner recounted in her book. “Cheyenne Chief White Antelope told Governor Evans that this unprovoked shooting of Lean Bear marked the beginning of hostilities.”

Later in the summer, Arapaho Chief Left Hand and some of his men narrowly escaped the same fate, being shot at when they tried to offer soldiers aid to help find livestock stolen in a raid.

In early June, four members of the Hungate family were killed on their ranch near Denver, with speculation that they were killed by Arapaho men who had earlier clashed with the owners, according to History Colorado.

All this came in advance of Evans’ June and August proclamations, setting into motion the congregating of innocent Arapaho and Cheyenne people beside the Big Sandy Creek in November. There, at the dawning of November 29, some 800 civilian and military troops in the Third and First Colorado Calvary units attacked and viciously murder and horrifically maimed and mutilated mainly women, children and elders as the younger men were out hunting for food. The violence continued for much of the day under Chivington’s command. Many prominent elder Cheyenne and Arapaho leaders died during the attack or from wounds suffered there, including Chief Left Hand.

The Sand Creek Massacre shocked the nation, especially from the eyewitness accounts of soldiers who refused to take part, including Capt. Silas Soule and Lt. Joseph Cramer, both of the First Colorado Volunteer Cavalry, who ordered their men not to attack. Eventually, Colorado Territorial Governor John Evans was ousted from his post, but Chivington, whose temporary military service had ended, was never prosecuted.

We Are Stronger Together – Anti Media News