Home News Cop Gets Felony For Killing An Elk, But No Trial For Killing... 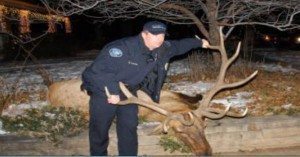 This is becoming a familiar sight in this country. White cops and ex-cops are prosecuted for the killing of animals and not unarmed black men. It is like we are living a nightmare over and over again.

This time, it happened in Boulder, Colorado. An ex-police officer was convicted of killing and poaching a “beloved trophy deer” in a residential neighborhood, according to USA Today. (I think the language they used of “beloved, trophy deer” shows the compassion for animals, but not the same for unarmed, black men.)

Carter shot “Big Boy” the bull elk with his buckshot-loaded shotgun as it grazed on fallen crabapples, and then called in a friend and fellow officer to help remove it as horrified neighbors watched Jan. 1, 2013. Defense attorneys argued the elk was injured and had to be put down to protect the community.

“Nobody wants an officer like this in any police department,” said Boulder District Attorney Stan Garnett. “The most important thing for my office was to get a felony conviction.”

“Nobody wants an officer like this in any police department,” said Boulder District Attorney Stan Garnett. “The most important thing for my office was to get a felony conviction.”

Residents of the neighborhood held candle light vigils for the deer. A memorial was set up in the location of the shooting and killing of the deer in loving memory for the animal. Further underscoring the love for animals by the country, but not that of young, black, unarmed men being gunned down in the street.

How does it make you feel knowing an Elk will get more justice upon their murder by a cop than your son?

Something has to give in this country. This cannot continue to happen as we are not just going to continue to turn the other cheek only to have our face rubbed in the lack of value for our lives by situations like this.

16 Arlington TX Cops Who Wrote Fake Traffic Tickets Allowed to Resign Instead of...