Home News Cops Got Caught On Video Murdering A Citizen In The Street –... 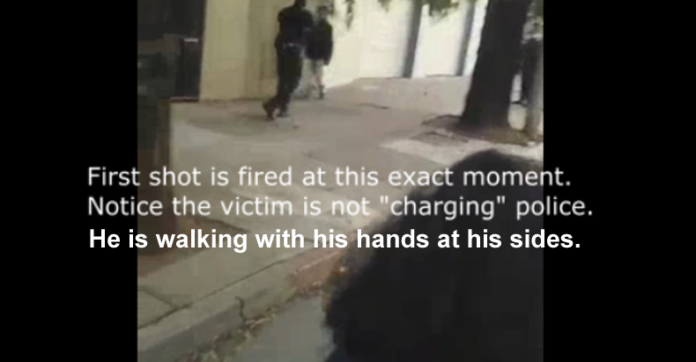 A disturbing video has surfaced online and is now going viral.

It shows San Francisco police officers literally emptying out their magazines onto a man who was trapped against a wall.

Police are claiming that the man “charged” at them, but as the video makes clear he was not posing any direct threat, nor was he “charging” at the moment they shot him to death.

We are still awaiting further details about the incident, including the victim’s identity as well as that of the officers responsible for killing him.

The cops have also told the mainstream media that the man was a “suspect in a stabbing,” but we have no independent confirmation of that claim yet.

The man is reported to have died on the scene.

The police sprayed him in a hail of gunfire, ensuring he would not live to tell his story.
Police claim he was carrying a kitchen knife.

Even if that claim is true, the video clearly shows the man merely walking with his hands at his sides.

He was not charging anybody.

The cops are claiming that they “feared for their lives.”

If they “feared for their lives,” then why does the video show THEM rushing toward the man, rather than the other way around?

The man has not officially been charged with any crime.

Several witnesses who saw the shooting agree that it was murder and can be heard on the video screaming in shock.

Another Pipeline Moved From A Wealthier, Middle-Class Area To Area Populated By Indigenous People...

Records Show Govt Knew Of Dangers Of Oroville Dam For YEARS — Did Nothing...