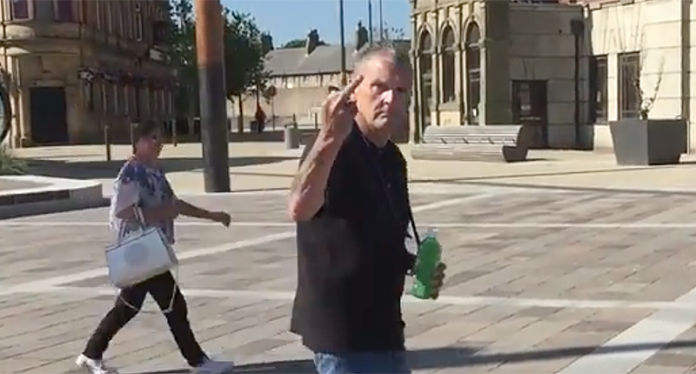 A British man is now finding himself behind bars for 15 months after being convicted of the assault of a Muslim woman in a niqab.

Peter Scotter declared he was taking his “f*cking country back” defending his actions to police by saying that the woman “could have been a bomber.”

A woman was waiting for her husband with her 9-year-old son outside of a jewelry store when 56-year-old Peter Scotter allegedly targeted her because she was wearing a niqab veil as a practicing Muslim. He ripped the veil from her head “really hard” and threw it on the ground.

“You’re in our country now f*ckinging get out,” the British man allegedly shouted at her, according to The Independent. “You f*cking stupid Muslim.

Her husband then came out of the shop and pushed Scotter away in an attempt to protect his wife while other community members also stepped in to help.

Scotter was forced into court after the assault, where Prosecutor Neil Pallister described her as being in “so much shock” that she “didn’t know or understand what he said.”

She began shouting at Scotter, “What you doing man, how dare you?”

“When she recovered her niqab it had been damaged by the defendant’s actions,” the Pallister said. The incident was so terrifying to her that it left her unable to even go outside.

“The male encroached my personal space and assaulted me. He had no right to do that. I believe this incident has taken place because of my religion and the clothes I wear,” the police’s victim impact statement read.

When Scotter was dragged away by security, he allegedly shouted that he was taking his “f*cking country back”and implied that his victim was a potential terrorist. Since his arrest his attorney is backtracking and explains these were simply the actions of a drunkard to be excused.

Tony Hawks, Scotter’s attorney defended his client’s actions by saying that they were “ignorant and despicable” but that the man was “hopelessly drunk” at the time.

Scotter ultimately pleads guilty to “racially aggravated assault by beating” and was sentenced to 15 months in prison.

The incident occurred July 3, 2016, just after the UK Brexit vote.

Scotter stuck a middle finger in the face of a photographer when he arrived at the Newcastle Crown Court.

The Independent reported a 41 percent increase in similar attacks on Muslims than the previous year.

“Comments like you have made cannot be accepted in our society,” Judge Stephen Earl said.

Although this incident occurred across the pond, the United States is becoming no stranger to these types of crimes. While Brexit is often labeled as the catalyst for the rise Islamophobic hate crimes in Great Britain, the same is often said about the election of President Trump being the catalyst in the United States. His Islamophic immigration policies and fear mongering of Muslims and Islam on his campaign trial has legitimized the bigoted views of many who are now also “taking their country back” as seen in recent attacks such as the Portland murders and the murder of Virginia teen Nabra Hassanen.

What are your thoughts on Scotter’s sentencing? Did he get what he deserves, and do you think this will set a precedent of how other nations should address Islamophobic hate crimes? Share your thoughts with us at CCN in the comments below.

Twitter Suspends Fake Accounts after Trump Thanks Propaganda Bot For Its Support – Anti...