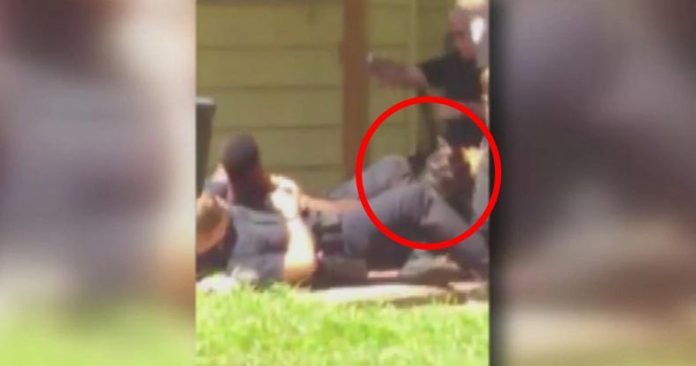 Bartow, FL — Marquis Wright, 21, will likely be getting a hefty check at the expense of Bartow taxpayers in the near future as the taxpayers are held accountable for the horrific actions of the Bartow Police Department. For asking police to stay out on the other side of his fence, Wright was attacked, tasered, mauled by a K9, and kidnapped.

When police came to his home on Monday, Wright had done nothing wrong, committed no crime, and had harmed no one. However, the fact that Wright was entirely innocent did not prevent his attack and subsequent arrest.

According to Wright, when police showed up at his home Monday, he simply asked them to stay on the other side of his fence on his own private property. The cops, however, apparently did not listen and things escalated from there, according to Wright.

“They just asked for my information and that’s it,” Wright said as he described how quickly police attacked him.

Luckily for Wright, the violent attack and arrest were caught on a cellphone video. It catches the K9 attack and the screams of neighbors who look on in horror.

Police had come to his house that day to serve a warrant to Wright’s brother. Naturally, the Bartow Police Department is claiming they did nothing wrong because — wait for it — Wright ‘fit the description.’

After claiming Wright looked like their man, police then claimed the right to use deadly force against him. While the video does not capture the beginning of the attack, police claimed Wright ‘resisted’ the egregious arrest and so they unleashed the K9.

“I don’t know anything about any resisting arrest. They took it too far,” Wright said.

Before police unleashed the K9, however, Wright was tasered twice.

As the Free Thought Project has reported multiple times, police officers often employ extremely painful tactics as they yell at suspects to ‘stop resisting.’ The ‘resisting’ is often little more than the subject writhing in pain or attempting to defend themselves from the attack.

While the police department claims they are ‘investigating’ the use of force employed by their officers, the chief is already noting how he sees nothing out of the ordinary in the video.

“With the video that I saw and with the preliminary investigation that we have, I don’t have any reason to suspect that they were way out of policy or out of policy at all,” Dorman said.

Wright, who is now planning on suing the department, was arrested after the K9 mauled him. As per standard procedure, the officers, who attacked the innocent man, justified this attack by charging Wright with — wait for it — resisting arrest.

How, exactly, an innocent person, who was not under arrest, can be charged with resisting that arrest, remains a mystery despite how it is used as a tactic over and over again.

Unfortunately, for the police, they were unable to employ their usual tactics and shame Wright in the media after the K9 attack because, prior to these officers coming to his home, attacking, and arresting him — Wright’s never been in any trouble with the law.

“I had no record. No record at all,” Wright said.

After his arrest, Wright was treated at a local hospital. He now walks with a cane due to the torn flesh in his right leg.

We encourage Wright to challenge his charges and attempt to hold the officers who did this to him accountable. However, if history is any indicator, the only people to normally be held accountable for attacking, mauling, and kidnapping an innocent man will be the taxpayers.

By: Matt Agorist From: The Free Thought Project

Mark Zuckerberg Has BREAKDOWN On Live TV When Confronted About CIA – Anti Media...