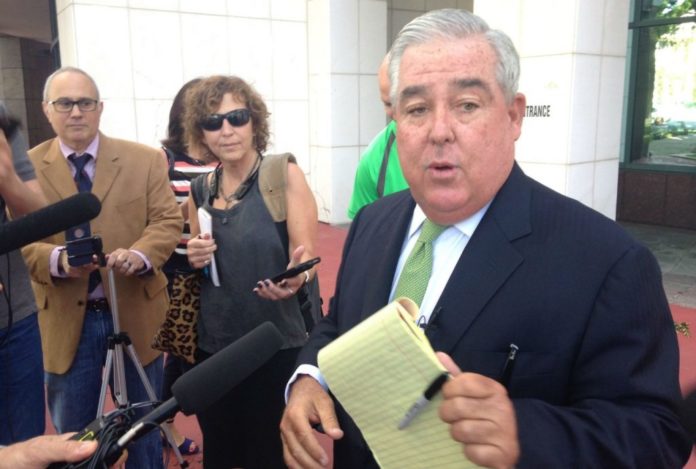 Attorney John Morgan traveled to Tallahassee on Thursday to file a lawsuit against the State of Florida over the recent ban of smoking medical marijuana.

The state recently passed Amendment 2, which expanded the uses for medical marijuana in the state, but also banned smoking it.

Today is beginning to finish what I started on behalf of really sick people throughout the state of Florida!#NoSmokeIsAJoke

Morgan, who is popularizing #NoSmokeIsAJoke, argues Republican lawmakers are disrespecting the will of the voters.

At a news conference in Tallahassee, Morgan targeted Rep. Ray Rodrigues, who took a leading role in drafting the smoking ban within the law. Morgan believes the doctors can make recommendations to their patients rather than politicians deciding how people should use their medication.

“Do we give a rat’s a** if a person who died from ALS smokes instead of vapes?” he said. “I don’t, and I trust the doctors to figure out what’s best for that client, best for that patient, not Ray Rodrigues.”

The ban’s supporters have their own arguments as they believe they are the best ones to choose how medication should be used by people they do not know. They claim there is no way to accurately measure dosages by smoking medical marijuana. Supporters also point out there are many ways to consume it legally, including vaping and eating the marijuana.

“What I have tried to do is make sure we do this in a way that honors the letter of the amendment, the spirit of the amendment,” Rodrigues said. “But also exists within the confines of federal law, which is a paradox because this is a Schedule 1 substance that is illegal.”

Morgan believes Rodrigues’ illogical argument will fail in court, and when it does, the very thing Republicans say they’re trying to prevent, could come to pass.

Should politicians choose how medication should be used by patients, or should it be the doctor that decides what is best for each patient?  Let us know your thoughts in the comments below!

China Just Issued a Nuclear Warning to Donald Trump and the United States –...