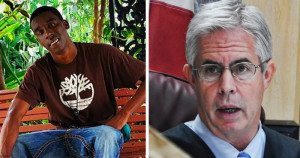 As unbelievable as this sounds, it is true. A Florida judge finds a way to ruin a man’s life for driving with a suspended driver’s license. People are outraged over these rulings and the family wants change.

Judge Matthew Destry is the Florida judge behind the egregious ruling, one that is hard to believe is real. Many feel there is no way anyone should be given 60 years in prison for driving on a suspended license, but that is what the victim, Herbert Smith, is facing.

Judge Destry is over the Broward County Clerk of Courts. Apparently, he has a long history of giving black people maximum sentences and now the family is calling for him to be removed and the sentencing to be changed.

There is a growing Change.org petition circulating around the internet to get rid of the judge. You can read the excerpts from the petition below:

On Tuesday November 24, 2015 a young man by the name of Herbert Smith was sentenced to 60yrs in prison for a simple violation of probation due to a drivers license suspension charge, by Judge Matthew Destry of the Broward County Clerk of Courts. This judge has been known for over sentencing people of color I’ve read several articles and several people have spoken about this judge as far as to how they were unfairly treated. We will not sit around and allow these types of injustices to go on we want justice. Minimum mandatory sentencing guidelines are a violation of our constitutional rights it gives the judge the right to lock people away and throw away the key, I’ve seen murderers and rapist get less harsher sentences, This judge is unfair and needs to be removed from the bench because he doesn’t have the best interest for people of color. Please sign this petition if you fully understand why it’s important to stand up against inequality and injustice in the courts.

Hopefully, this Judge is removed from his position, but sentencing for Herbert Smith is reduced to something reasonable for the infraction of driving with a suspended driver’s license.

This case highlights the growing problem black people face in this country. It isn’t just the racist, crazy police officers gunning us down for no reason, but also the legal system handing down maximum sentences, weak public defenders not interested in defending black people and the lack of oversight of the entire system.

Continue below to watch Boyce Watkins analysis of the story: