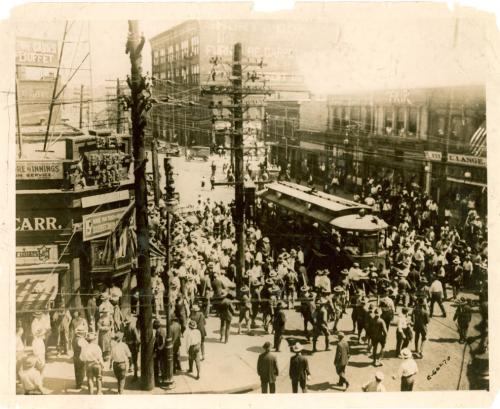 East St. Louis back then was an industrial boom town with all kinds of conflicts and tensions between ethnic and political groups, workers, companies, and unions but despite this there were plenty of jobs. When World War I cut-off the flow of immigrants from Eastern Europe, companies went to the American South for a fresh supply of cheap labor. And now these northern industrial cities had a new issue to deal with, something the called “the negro problem.”

Like the Eastern Europeans before them, Blacks now left home to find work and to start new lives in northern industrial settings. They heard that if you couldn’t get a job in East St. Louis, you couldn’t get a job anywhere. There had always been Blacks living in the American boom towns but their numbers were relatively small until now. You could see it everyday at the East St. Louis train station. The new arrivals from the South were coming in such numbers that they were becoming more visible in town, in the factories and in politics. These were loyal Lincoln Republicans, anxious to vote and the Republican Party leaders were anxious to get them registered. This upset the political balance and there began to be lots of talk about voter fraud. The charges came from the Democrats and during Woodrow Wilson’s 1916 re-election campaign, the Justice Department investigated what was being called colonization. An alleged conspiracy to import Blacks, to steal elections in northern cities. One story, unsupported by evidence but widely circulated, reported on an alleged plot to have Blacks vote in East St. Louis, board a train to vote in Springfield and then vote a third time in Chicago.

Most Blacks had moved to the area to find jobs but people were lead to believe they had come to steal elections. Labor leaders said they were there to steal jobsand the huge numbers of newcomers were straining the local housing services. Racial tensions continued to grow. It’s not as though the country was ever at peace with itself in this era. There had been race riots and labor battles like these in other cities before and after. But what happened in East St. Louis struck a national nerve. Reports of Americans killing Americans, came on the same news pages as reports of American troops in Europe fighting to save democracy.

It was labor troubles at the Aluminum Ore Plant that set the tragic events in motion. The company followed its usual practice of bringing in replacement workers to break an ongoing worker strike and keep the plant in operation. Racial tensions began to increase when 470 Blacks were hired to replace white workerswho had gone on strike against the Aluminum Ore Company. There were white replacements also, but strike leaders made Blacks the main focus and the target.

In the Spring of 1917, the National Guardwas brought in to protect the factory and its workers but everyone knew this was a town on the verge of a race riot. When violence flaredup in May, the National Guard was able to keep it under control but East St. Louis hadn’t cooled off. Tensions built, fueled by unsubstantiated press reports of Black crime waves and gun purchases, and by rumors and inflammatory public speeches. The goal was to drive the Blacks out of East St. Louis.

On the evening of Sunday, July 1st, a car drove through a Black neighborhood, firing shots from its window. Later, when another car approached, thinking it was the same car from earlier that evening, shots were fired from the crowd towards the car. It was not the same car, this car had police officers in it and two were killed. When word of what happened spread, a white mob set out to attack Blacks. Men, women, and children were beaten, lynched, burned and shot to death. The mob dragged Blacks out of street cars and attacked them. Around six o’ clock that evening, white mobs began to set fire to the homes of black residents.  Residents had to choose between burning alive in their homes, or run out of the burning houses, only to be met by gunfire.

No one will ever know for sure how many people were killed in the East St. Louis Race Riots of 1917. The official death toll was 39 Blacks and 9 Whites. Other historians say the number of Blacks killed was closer to 100 or more. They searched for bodies but there were many people who couldn’t be accounted for. Maybe they had crossed the bridge to St. Louis or maybe their bodies were somewhere in the river.

The nation responded with speeches, editorials and accusations. Some blamed the industries for importing Blacks, some blamed the police and the city government. Some said whites had only acted to prevent a Black uprising in the South. Many said the race riot exposed America’s hypocrisy. Considering that the United States was fighting in Europe to defend democracy, while failing to protect its own citizens. This was not lost on Marcus Garvey. At a speech in Harlem on July 8, Garvey told a cheering crowd, “This is no time for fine words, but a time to lift one’s voice against the savagery of a people who claim to be the dispensers of democracy. I do not know what special meaning the people who slaughtered the Negroes of East St. Louis have for democracy… but I do know that it has no meaning for me.”

An Investigation Found Trump Lied, NEVER Donated To Any 9/11 Charities