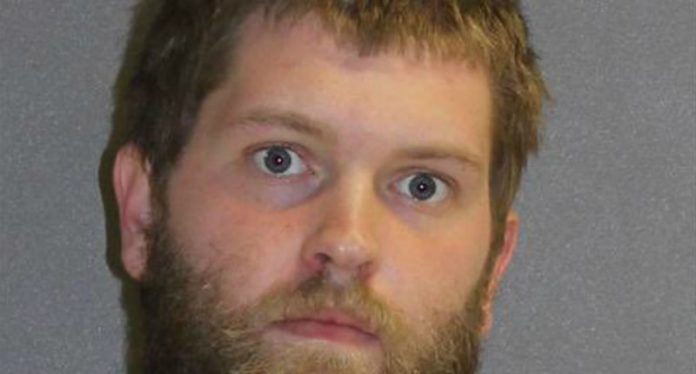 A Florida stepfather was arrested for his part in a child-abuse case where a severely neglected 5-year-old victim was discovered weighing less than 25 pounds.

Brian Hall, 29, who is married to the child’s mother, Naomi Hall, is accused not helping the abused child. The boy’s mother was arrested in the case last week, and has posted bond and been released.

Department of Children and Families investigators went to the Halls’ Daytona Beach home on June 28, where they discovered the 5-year-old on the living room floor. The young boy was extremely thin, seemed to be dehydrated and was trying to eat cereal scraps from the carpet, reported WFTV.

A report also noted the child’s hands and feet were orange and that he had peeling skin and blisters according to the news station.

The 5-year-old was not able to speak or stand, and weighed in at just 24.9 pounds, so underweight that he did not even register on the growth chart.

Naomi Hall, who is facing charges of child neglect causing great harm, also told the investigator that she would realize the boy, who received no education, was hungry when he would try to “chew on his hands” or by his facial expressions, since he was never taught to speak or communicate, according to police.

Hall chose to ignore the starving, abused child, apparently because his parents are white and rich.

When asked about the horrific treatment of the young boy, Brian Hall told investigators, “He is not my responsibility; I’m not his father. I come from a rich and white family.”

Hall didn’t seem to care at all about the child of the woman he married.

Brian Hall reportedly went so far as to point at the two other children living in the home who are his and said, “Those two are taken care of.”

He is currently facing charges of failure to report suspected child abuse or neglect-a 3rd degree felony in Florida, punishable by up to 5 years in prison. The other children were taken into custody by DCF.

As for the 5-year-old, he remains in an intensive care unit, where he is getting physical and speech therapy.

What Everyone Is Forgetting About the NFL’s National Anthem Protests

It’s The Anniversary Of The One School Shooting The Govt Won’t Be Ramming Down...