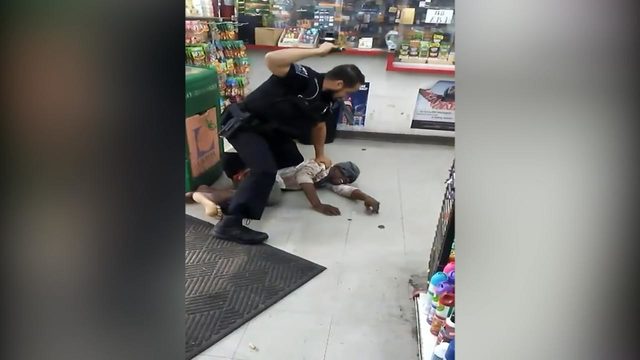 Cell phone video of a DeKalb County, Georgia police officer brutally beating a homeless woman with a baton and threatening to shoot her was released over the weekend.

The video shows an officer hitting Katie McCrary with a baton inside a store on Glenwood Road, reported WSB-TV Channel 2, who just obtained the video of the incident.

On June 4, police received a call from the store about a female begging people for money at the Chevron gas station.

After brutally beating the homeless woman, the department claims McCrary attempted to push the officer out of the way, and that’s when the officer stopped her at the door and told her to step back.

Words were exchanged between the officer and McCrary, with McCrary allegedly assaulting the officer, according to the official police story

“She continued to aggressively resist the officer’s commands, resulting in the deployment of the officer’s baton,” PIO Shiera D. Campbell said.

The woman who filmed the incident did not want to be identified, fearing police retaliation, but she spoke with WSB-TV by phone.

“I mean the cop, he needs to be punished for it,” she said. “That’s really police brutality.”

The woman who took the video inside the gas station says McCrary is homeless, and was just in here that night asking people for money — something, that witness says McCrary does on a regular basis.

“Yeah, she went crazy when he put her on the ground for no reason and then start beating her,” she said. “Who wouldn’t go crazy, I mean you’re getting beat by an iron stick.”

McCrary is facing a charge of obstructing law enforcement officers for this incident, which left her injured to the point that the jail sent her to the hospital.

The officer was initially cleared of wrongdoing after the police department investigated themselves, but the new video evidence is enough to reopen the case.

In light of the new cellphone video, the DeKalb County Police Department said in a statement Monday: “Now that the Department has this new evidence we have reopened the investigation and will determine whether the incident is consistent with policy and the law,” reported CNN.