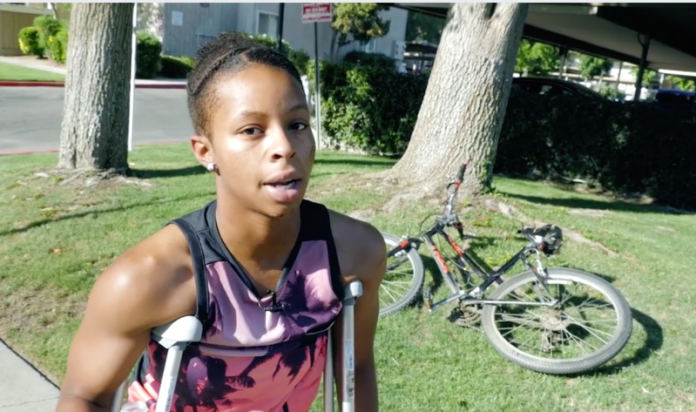 A black 19-year-old girl says Bakersfield, CA police drew their guns, punched her in the mouth, and had a police dog bite her after they allegedly mistook her for a much larger, bald black man who was suspected of threatening people with a machete at a nearby grocery store.

Tatyana Hargrove’s story is picking up more and more attention after the NAACP in Bakersfield posted a video of her sharing her story to its Facebook. That video, which insists the race played a role in the brutal encounter, has gotten 3.8 million views so far, reported The Root.

In the video, embedded below, the 19-year-old is shown holding crutches and close ups of the scratches, bites and other bruises on her body and face that were sustained during the June 18 assault by Bakersfield police.

Hargrove said she rode her bicycle to a local store to buy a Father’s Day gift. On her way back home she stopped to get a drink of water out of her backpack.

Then she noticed three police cars behind her. One of the officers already had his gun drawn as soon as he got out of his patrol car.

The teen said that officers demanded to see her backpack, but, because she knows her rights as an American Citizen, she asked them for a warrant.

The officers then intimidated her by threatening her with mauling by police dog if she did not submit to the illegal search. But after she gave up her personal property, they had the dog attack her anyway.

“When officers pointed out the K9 dog to her, Hargrove said she got scared and gave them her backpack, but at that point the officer allegedly grabbed her by the wrist and neck and punched her and threw her on the ground. At that point the K9 came and bit her,” reported The Root.

Hargrove said one officer put his knee in her back and another knee on her head.

Ultimately, after being beaten by the officers and mauled by their dog, the teen was arrested on suspicion of resisting or delaying an officer and aggravated assault on an officer.

The Root relayed the ridiculous official police version of the story:

Police say that they mistook the 5-foot-2, 115 pound Hargrove for a suspect who was described as being a 25 to 30-year-old bald man with a goatee, who stands at around 5 foot 10 and weighs 170 pounds.

The arresting officer Christopher Moore wrote in a report, “appeared to be a male and matched the description of the suspect that had brandished a machete and was also within the same complex the suspect had fled to.”

Moore accused Hargrove of ignoring police commands and putting her feet on her bike pedals appearing as if “she was going to flee.”

At no point does the report say that Hargrove actually left the scene.

Moore claimed that as another officer, G. Vasquez, was handcuffing the 115 pound girl, she spun her left shoulder into him, knocking Vasquez off the balance and taking him to the ground. Police claim Hargrove fell on top of Vasquez and then spun around into a “mounting position.” That was when Vasquez punched her in the mouth.

Moore said at that point he realized Hargrove was within reach of her backpack which Moore still apparently suspected had a machete, causing him to release his K9.

Moore claimed that he didn’t even realize Hargrove was a woman until she told him her first name, “Tatyana.”

The actual suspect that police was looking for, 24-year-old Douglas Washington, was arrested the next day.