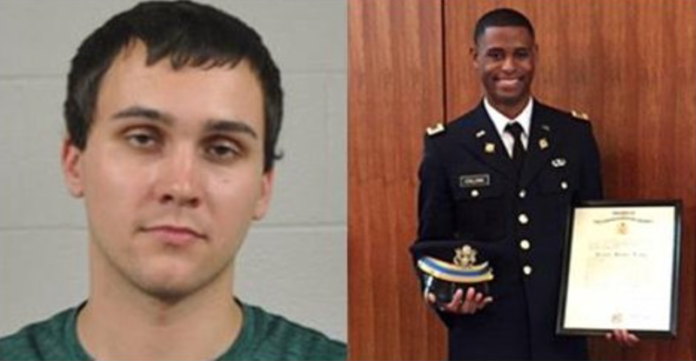 Sean Urbanski, a white University of Maryland student and a member of the white supremacist Facebook group, “Alt-Reich: Nation,” is accused of stabbing and killing black Bowie State student Richard Collins III on May 20. He has been indicted in the crime, but he will not be facing hate crime charges.

Urbanski, 22, is charged with killing the 22-year-old Collins just three days before Collins was set to graduate from his historically black college. Officials said video of the unprovoked attack was instrumental in getting the indictment, reported NBC Washington.

Although the FBI and local police investigated the killing as a possible hate crime, Prince George’s County State’s Attorney Angela Alsobrooks said at a news conference Thursday afternoon that prosecutors were not able to bring hate crime charges against Urbanski because , “We didn’t have enough today,” she said.

Urbanski is a member of a Facebook group called “Alt-Reich Nation,” where members post hateful things about black people and other non white Christian groups, Alsobrooks said it’s difficult to build a hate crime case, even when a white supremacist attacks and murders a black man unprovoked.

“Developing a motive is always a challenging aspect of a case. In this case, and in any other case, you can’t get it wrong,” she said.

The investigation into the case is ongoing, and it is possible that a hate crime could still be charged in the future if evidence is found to support it.

Prosecutors are seeking a life-without-parole sentence on the murder charges against Urbanski, so even if he is not officially charged with a hate crime, he should still he locked up for life.

Most people, at least minorities, will still consider it a hate crime, because that is what it was.