Home News White Man Shoots At Police, They Shot Him With Bean Bags, Then... 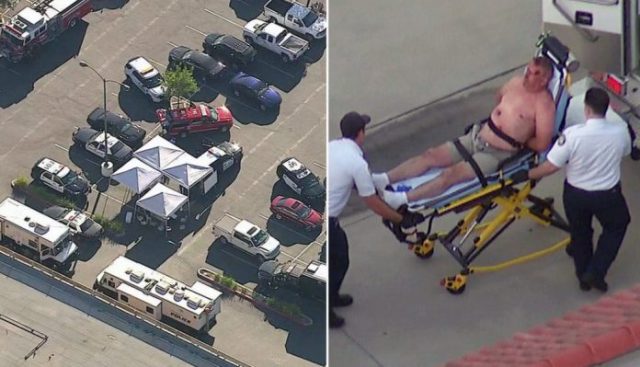 Law enforcement is thought to be a dangerous job. Everyone seems to agree it is and understand cops just want to go home to their families at the end of the day.

However, Black Americans are consistently wondering why are they shot and killed by police officers, when unarmed, but armed, dangerous and psychopathic White people are routinely arrested and treated like humans by these same police officers? Just this past week Terrence Crutcher was executed after his car broke down. He was unarmed, peaceful and had his hands up!

Last month, a White man went on a rampage in Brea, California at a motel.

“A suspect who shot at officers while being barricaded in a Brea motel for hours was taken into custody Monday evening, according to police.

Authorities said they responded to a call of a despondent man at the Hyland Motel in the 700 block of South Brea Boulevard at about 3 p.m.

When officers arrived at the scene, they said the man fired at them through the door.

After being barricaded for several hours with SWAT outside the motel, the man was eventually shot with bean bags and tackled by SWAT.

Apparently, police officers are capable of de-esculating and arresting suspects, even shooters, alive, but this only seems to apply to White people. Black people are routinely shot and killed in this country….even when they don’t have a weapon.

Furthermore, US Government statistics show that only in 10 out of the said 102 cases found a police officer charged with a crime. And as if that number isn’t bewildering enough, only 2 of these deaths resulted in actual convictions of the officers.

Does the right to be treated humanely by the police only apply to White Americans or all Americans?

The latter doesn’t seem like the case when one investigates the number of unarmed Black people gunned down by the police paid to “protect and serve.”

Study Shows That Black Men are Perceived as More Threatening Than White Men of...

8000 Flint Residents Threatened With Foreclosure For Refusing To Pay For Toxic Water –...

Disabled Health Care Protesters Dragged from Their Wheelchairs and Dropped on the Ground –...