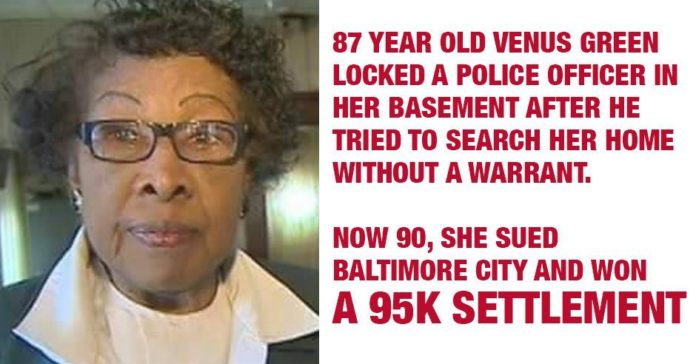 What do you do when a Police turns up at your door and tries to gain entrance to your home without a warrant? Well, if you are 90 year old Venus Green you lock the law breaking lawman in your basement!

Venus was 87 at the time when the incident happened in which she said police treated her like a criminal.

In July 2009, Venus’s grandson, Tallie, was wounded after he was shot, he said it happened at a convenience store. However the police insisted it happened inside Venus’s home. Venus or Tallie himself were being blamed for the shooting!!!

Here is an excerpt from an article on WbalTV about the incident and the exchange:

“Police kept questioning him. They wouldn’t let the ambulance attendant treat him,” Green said. “So, I got up and said, ‘Sir, would you please let the attendants treat him? He’s in pain,’” Green said.

Green said the officer said to her, “Oh, you did it, come on, let’s go inside. I’ll prove where that blood is. You did it.”

Police wanted to go the basement, where Tallie lived, but Green refused on the basis that the police did not have a warrant.

“I said, ‘No, you don’t have a warrant. You don’t go down in my house like that. He wasn’t shot in here.’” Green said the officer replied, “I’m going to find that gun. I’m going to prove that you did it.”

A struggle ensued between a male officer and Green.

“He dragged me, threw me across the chair, put handcuffs on me and just started calling me the ‘b’ name. He ridiculed me,” Green said.

An officer went into the basement and Green locked him inside.

“She locked the door, the basement door. She basically took matters into her own hands,” Nilson said.

“This was my private home, and if I latched it, that was my prerogative because he had no search warrant to go in my basement. So, I had to right to latch it,” Green said.

“I was once a block watcher, department head of a high school. (I’ve) been around education for over 50 years. (I’m a) law-abiding citizen, I’ve never been arrested, I paid my taxes, owned my home, my husband died 34 years ago. (I) raised my son and I have been brutally abused,” Green said. “I feel like the Police Department needs to go back to school.”

So she sued Baltimore city and they agreed on a $95k settlement because they simply knew they had no chance infront of a jury!

Go Venus! No warrant was issued and the man needed treatment. This was terrible behavior if the details are true!

Inmates Break Out of Jail, Burglarize a Dollar General, Then Break Back Into Jail

Colorado Is Using $3 Million From Marijuana Tax To Provide Food And Housing For...