Home News Once You Watch How Gummy Candy Is Made, You’ll Never Eat It... 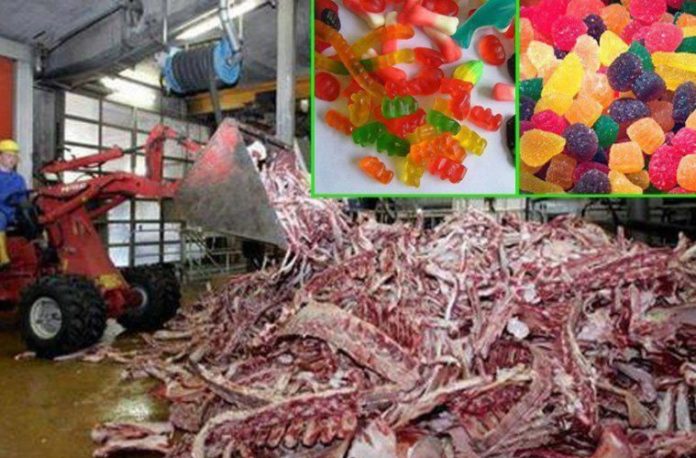 WARNING: After watching this deeply disturbing and unsettlingly graphic 2-minute video, you will never eat gummy candies ever again.

If you love gummy bears, one of the most popular gummy candies in the world, you probably would have an idea that your favorite sweet treats contain gelatin. Chances are, you would also know that gelatin ― a translucent, colorless, odorless, and tasteless gelling agent in gummy candies ― is made from animal by-products like pig skin, cattle hides, and farm animals’ bones. Essentially, gelatin is a food product derived by prolonged boiling of leftover skin, cartilage and bones ― leftover in meat industries – means waste generated during animal slaughtering and processing.

But perhaps this outward knowledge is not enough for you to remain detached from your love of gummy candies.

Therefore, a Belgian filmmaker, Alina Kneepkens, has created a short terrifying video to bring forth the gross truth about how gummy candies are made. Produced by Flemish TV show Over Eten, the video takes us backwards through the production line of gummy candies; starting with the gummy candies being eaten, Kneepkens winds back time to show their gory inception.

Perhaps you would like to have a look at it first, because, as they say, “seeing is believing”:

The nauseating video shows shots of a pig flesh moving along a conveyor belt; a machine peeling off skin from the pig’s carcass; while another slices the meat by a mechanized blade. As music beats in the background, pigs are dragged around the factory by their hind legs after having their skin melted off by vats of hot water and specialized flamethrowers.  The graphic video ends with a heartbreaking shot of a sad pig raising its pink head to blink slowly at the camera.

The makers explain on Vimeo:

This ‘Gelatin’ video tells the reversed story of how gelatin candy is actually produced. Starting from wrapped candy, going all the way back to the living pig. Just by showing a series of reversed images it reveals a detailed and truthful story on daily foods and its origin. This video ‘Gelatin’ is one in a series of reversed stories on sugar, crisps, black pudding, rabbit stew, lamb burger, pastry and mozzarella.

Kneepkens’ films on rabbit with plums ― a typical Belgian dish ― and black pudding are not for the fainthearted. She writes on her website:

“I got the assignment to direct some reversed audiovisual stories showing the production of some of our food. I saw quite a few slaughter houses and examples of both industrial and artisan food production. A true eye opener. Jelly is candy. But only few people know they’re made of gelatin from the skin of pigs. Sweet?

The FDA says that “there is no documented evidence of a deleterious nature to humans from the ingestion of gelatin, other than a rare allergenic response.” But after watching the chilling video above, would you still fall for your favorite sugary treats even if they not toxic to you? Or, would you try gelatin-free gummy candies or opt for other vegan gelatin substitutes? Huffington Post reports:

Agar (also called agar-agar) is a popular substitute for gelatin that is obtained from algae ― you might remember agar from your petri dishes in science class. Agar was also used to create the popular raindrop cakes that took America by storm earlier this year.

Kantha Shelke, a food scientist and spokesperson for the Institute of Food Technologists, tells Mic:

“The food, pharma, and dietary supplement sectors have looked into gelatin alternatives or substitutes. There’s incentive to create a gelatin replacement because of lucrative vegetarian, halal and kosher markets. But to date, no substitutes can replicate the functionality of gelatin.  Pectin and starches won’t cut it in gelatin puddings and other desserts because the texture will be either too sticky or too gummy.”

But, there is progress… Though, the choice is yours…

By: Vandita  From: Anonymous News