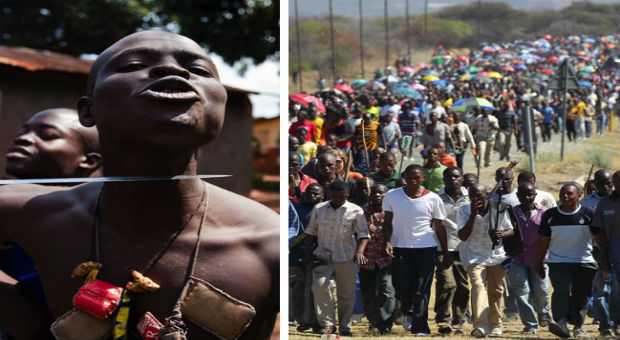 Muslims are being killed in the Central African Republic (CAR) by massive gangs of Christian extremists, most of whom had grown up from being child soldiers, the media, however, has remained silent.

The massive slaughter is being described as ruthless acts of “ethnic cleansing” by Amnesty International, resulting in hundreds of civilians scrambling for refuge inside a mosque by the border town of Bangassou according to Reuters.

The weekend attacks in Bangassou have involved hundreds of heavily weaponized Christian fighters who are targeting the Muslim population, a situation which is quickly spiraling out of control.

The AntiMedia reports: According to Reuters, the weekend attacks in Bangassou, located on the Congolese border, have involved hundreds of fighters with heavy weaponry. The fighting is aimed at the Muslim populations and signals that the conflict currently besieging the country is worsening.

“The situation is extremely deplorable and we are doing everything to rapidly retake control of Bangassou,” MINUSCA (the U.N. mission) chief Parfait Onanga-Anyanga told Reuters in an interview.

According to Onanga-Anyanga, many of the fighters are child soldiers who appeared to be under the influence of drugs.

The head of the Red Cross in CAR, Antoine Mbao-Bogo, said his staff has counted 115 bodies in Bangassou following the latest fighting.

While these developments may be unheard of in the eyes and ears of much of the American public, the truth is that this conflict has been raging for some time now. According to the Guardian, thousands of Muslims have been killed or displaced in the conflict. For example, the city of Bangui previously had approximately 130,000 Muslim residents; the number of Muslims is now likely less than 1,000.

According to Reuters, the U.N. base in Bangassou has also been targeted.

CAR has been besieged by this violence since 2013, when mostly Muslim Seleka fighters ousted then-President Francois Bozize. Amnesty International has referred to the developments in the country as “ethnic cleansing” since the fighting erupted.

As this conflict rages on, however, don’t expect the corporate media to pay too much attention to it anytime soon — it doesn’t fit the mainstream narrative that only majority Muslim countries deploy groups of extremists that terrorize civilians.
In 2015, the U.N. Development Index rated CAR as having the lowest level of human development. It was ranked dead last. The country is the world’s 12th largest producer of diamonds and is home to a secretive, bloody gold trade and also harbors mineral, uranium, and oil reserves.

Liberation might be just around the corner, though the country’s majority Christian population might exclude it from the U.S. military’s ‘War on Terror’ narrative.

‘Hell’ Was Invented By The Church To Control People With Fear – Anti Media...