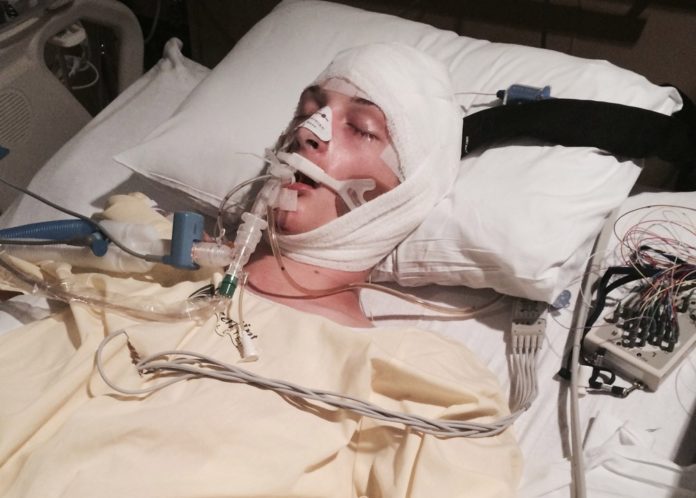 Independence, MO – After a video surfaced showing Officer Timothy Runnels tasing a 17-yr-0ld boy continuously until his heart stopped, a judge has sentenced the officer to four years in prison.

The video shows Bryce Masters simply asserting his rights after being pulled over by an aggressive police officer.

The officer ended up tasing the teen directly in the chest.

The tasing lasted about 23 seconds without interruption.

Bryce went into cardiac arrest and his heart stopped beating.

The officer is seen lifting Bryce’s limp body up and then slamming it down on the ground like a wet dish rag.

Jurors who saw the video gasped as Bryce’s body can be heard making a loud SNAPPING noise as the officer slams it down.

Several of Bryce’s teeth were knocked out and his jaw was dislocated as the cop evidently made sure to slam him face first into the concrete.
The Free Thought Project summarizes the case as follows:

Claiming that Masters had refused to completely roll down his window, Runnels asked Masters to exit the vehicle when the teen began recording the incident on his cell phone.

“He was like ‘what am I being arrested for?’ The cop just grabbed him and said ‘you’re under arrest,’” asserted Martes.

Tasing Masters in the chest for roughly 20 seconds, four times longer than officers are trained to deploy a Taser, Runnels pulled the teen out of the car and placed him in handcuffs despite the fact that witnesses did not see Masters fighting back.

Bryce was eventually taken out of a coma, but his brain has been damaged, reports say.

Police ‘Accidentally’ Shoot 13-yo Girl At Elementary School After She Became ‘Combative’ – Anti...