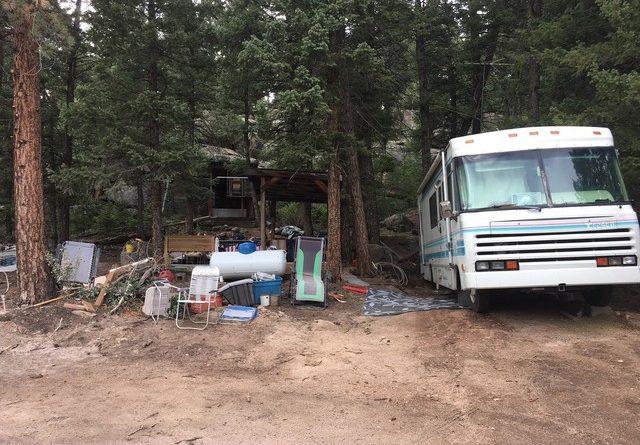 After being homeless for 6 years, Clem Smith is excited to live in a motor home with his own address on his own newly purchased land.

The RV is parked on property in Conifer, CO that he purchased in March after he received money from his mother’s estate.

Of the $214,000 inheritance, he spent $125,000 for the property and put the rest into improvements for a power connection, water well, septic drawings, septic engineering and road engineering, reported ABC Denver7.

He also purchased an old front end loader, a dump truck, used car, shipping container and a chicken coop with four hens. All are parked on his property.

He said he’s intends to spend the rest of his life there after building a house, but that dream is being torn apart by the government.

A neighbor complained about the RV, shipping container and “trash”, so Smith was cited for code violations.

The complaint alleges that he’s allowing the outdoor storage of those items on vacant land and that he was going to allow people to live in the shipping container.

“I believe the person that complained came in (the shipping container) and saw a dresser and thought people were going to try to live here,” he said.

Smith said the dresser is his “workbench” and he uses it to store tools and paperwork.

So basically, Smith is being punished and fined because a nosy neighbor trespassed, then lied to the government.

Jeanie Rossillon, Jefferson County’s director of development and transportation, said that under existing code, the RV and shipping container are considered accessories and cannot be on the property without a house.

Smith says he will build one, but needs more time. He wants to live in his RV and leave it parked on his property until that time comes.

“I own this property,” he told Denver7, with emotion welling up in his voice. “I paid for it in cash. It’s all mine.  I should be able to live on it for a certain amount of time, while I’m surveying, engineering or planning.”

Smith is worried he will end up being homeless again and that he will have to park his RV at Walmart even though he owns his own land.

“I don’t think it’s fair,” he added, “I’ve been on the homeless circuit for several years and everybody at the campgrounds and at Walmart, is hoping to get a piece of property and build their own home.”

What do you think of these codes that don’t allow for people to achieve “the American dream”? Let us know in the comments below!

Assange Releases SMS Records Showing He Was Framed By Police In Rape Cases –...