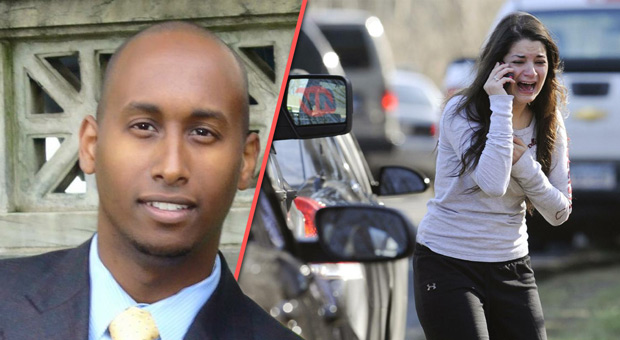 A lawyer who was investigating the Sandy Hook shooting was found dead in his overturned car.

Police ruled Gugsa Abraham (Abe) Dabela’s death as a suicide despite a gunshot wound to the back of his head and “footprints” on his back.

His car was discovered on an isolated country road close to his home in small, upscale Redding, CT. The local police, including Chief Douglas Fuchs, determined right away that the car had purposely been crashed by Mr. Dabela because “he had been drinking”.

The local police, including Chief Douglas Fuchs, determined right away that the car had purposely been crashed by Mr. Dabela because “he had been drinking”.

Shortly before his death, Attorney Dabela, a bachelor, had frequented some of the local establishments to speak to Redding police and firemen about the events surrounding the Sandy Hook “massacre”.

According to CBS News, the family of an attorney found shot in the head in a wrecked car is suing police, saying they rushed to judgment in declaring the death a suicide and didn’t properly investigate because he was black.

The family of Gugsa Abraham “Abe” Dabela sued Redding police in federal court and has also hired its own forensic experts, with Connecticut NAACP officials are looking into Dabela’s death.

The suit alleges police in Redding, a mostly-white town, conspired to cover up a murder.

It also alleges police violated Dabela’s civil rights when they delayed processing his concealed pistol permit a year before his death.

Police Chief Douglas Fuchs said Thursday that he can’t comment on pending litigation. He has defended the police department’s handling of the investigation, and he noted the medical examiner’s office ruled Dabela’s death a suicide.

The lawsuit is against the town of Redding, Fuchs, seven police officers and “killer John Doe,” an unknown person. It seeks undisclosed monetary awards.

“The loss of my son remains unfathomable, but the continuing revelation of lies about his death and efforts to destroy his legacy have worsened the grief and swept us into an unimaginable, never-ending nightmare,” Dabela’s father, Abraham Dabela, said in a statement.

The family’s lawyers also say Dabela got a text message on the night of his death that read, “turn he just didn’t.”

The lawsuit alleges information about the sender of the text was deleted sometime after Dabela’s death.

He also bragged about how he and his men were the first on the SH scene, even before Newtown police showed up and he had to take command of the situation.

Another actor covering up Mr. Dabela’s death is Danbury State Attorney Stephen J. Sedensky who had star billing in the Sandy Hook saga.

He became a master in cover-ups. Sedensky acknowledged in his “official report” on Sandy Hook that they had been unable to connect the AR-15 is he alleged to have used with any of the slugs recovered and that the rifle he was supposed to have used to shot his mother did not have his fingerprints, which means that his investigation was unable to connect the weapons to the victims or the purported shooter, as a complete forensic failure.

A third person, a sort of decent guy who was tangled up in the SH web, is now retired Connecticut State Police Commissioner Reuben F. Bradford.

Attorney Dabela wrote to Bradford for help when Redding Police Chief Fuchs sat and sat on a gun permission Dabela had submitted.

Bradford intervened on Dabela’s behalf and that must have ticked off the ‘heroic’ police chief.Newtown is surrounded by small, affluent towns with their own police and fire departments.

Perhaps Mr. Dabela did run his car off the lonely road, shot himself in the back of the head and trampled himself on his own back.

It’s as likely a story as the Sandy Hook saga with some of the same actors involved.

The death of Gugsa Dabela would not be the first associated with Sandy Hook.

Tony Mead, who has done exceptional work on the charade, has noted a growing list of “disappearing witnesses” related to the case, which was published by James Tracy on his memoryholeblog.com on 10 July 2014. The complete article can be accessed here and in Nobody Died at Sandy Hook (2nd ed., 2016).

Does anyone seriously believe that an attorney with a background in neurobiology and physiology from the University of Maryland-College Park, a Master’s in public health and a law degree from Cardozo School of Law would contemplate suicide because he had had an accident?

Or, that he was drunk enough to have the accident and then formed the intention to take his own life in despair, and stomped on his own back? Just how dumb are we supposed to be?

The website Justice4Abe.com announced a reward for information leading to the arrest of anyone involved in Dabela’s death.

Oregon Woman Freezes To Death After Being Evicted For $338 In Late Rent Payments...