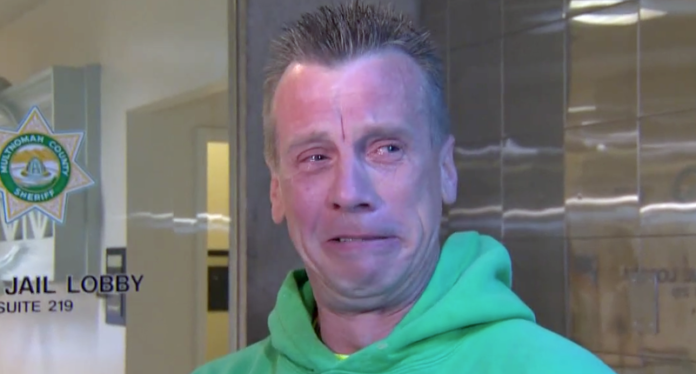 This man is so brave that he cried in court after committing a hate crime against innocent people because of “fear and paranoia.”

An Oregon man has been arraigned on hate crime charges after threatening a Muslim couple only days after 2 heroes were stabbed to death in Portland after trying to stop an anti-Muslim rant.

Frederick Nolan Sorrell, 49, of Gresham, OR wept in the hallway outside of court, following his arraignment on hate crime charges,  KGW reported.

Sorrell allegedly harassed a Muslim couple from his car for more than twenty blocks, during which time he allegedly made multiple attempts to strike the victim’s vehicle.

Sorrell also, “made pointing hand gestures that were said to resemble pulling the trigger of a gun, and shouted things like, ‘take off the f*cking burka,’ ‘this is America,’ and ‘go back to your f*cking country,’” according to the Council on American-Islamic Relations.

“We hope the arrest of this suspect will serve to deter others from committing bias-motivated crimes targeting Muslims or any other minority group,” said CAIR-Oregon spokesperson Zakir Khan. “CAIR-Oregon thanks the Portland Police Bureau and the Portland Mayor’s office for their diligent efforts in this case.”

Sorrell says he regrets what he did when he threatened and terrified the innocent couple because of their first amendment protected right to choose a religion.

“I guess my fear and paranoia, I just yelled out. I don’t go on social media looking to hate on people,” Sorrell told KGW. “I guess my ignorance and my stupidity is why I opened my mouth, and I shouldn’t have and I claim full responsibility.”

“I’m sorry I blurted out what I blurted out, my paranoia my fear.” Sorrell added. “I don’t wish death upon these people.”

Sorrell admits all of his information on Islam is based entirely on fear-based propaganda.

“In recent months, the City of Portland has experienced increased tension and concerns about hate crime activity and threats to community safety,” Portland Police noted. “The Bureau investigates all reports of bias-motivated crimes and encourages any member of our community who is the victim of such a crime to contact law enforcement. Under Oregon law, bias crimes are defined as any criminal act that targets a victim based on the suspect’s perception of the victim’s race, color, religion, sexual orientation, disability, or national origin.”

Officer Pulls Over Young Black Man Because He Doesn’t Believe He Owns Property In...

8 Men Now Own the Same as the Poorest Half of the World –...