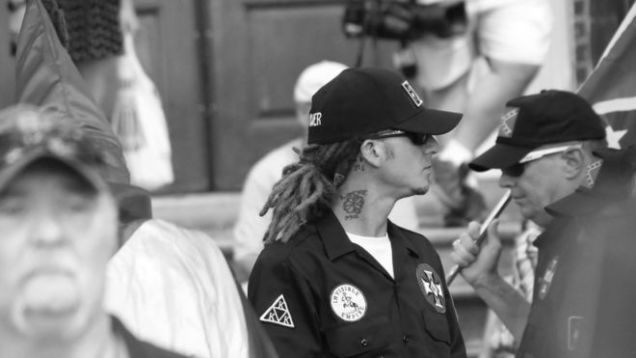 A photo from a recent KKK rally in Charlottesville,VA has people laughing in confusion after seeing a KKK member with dreadlocks. The rally had about 50 KKK members who were vastly outnumbered by several hundred anti-racist counter-protesters.

Yo, nobody tell the #KKK about were #dreadlocks come from. pic.twitter.com/nKUfIxYBwJ

“Me and my friend were in total disbelief,” said Cunningham. “We really couldn’t believe we had just seen a Klansman with dreads. We’re looking at the KKK here, and dreadlocks are basically a symbol of African culture. It was really weird to see.

Cunningham says he tried to speak with the dreadlocked racist, but the KKK member refused to talk to the black man.

Some on social media tried to defend his hair style by saying the style was not “owned” by any particular group. But realistically, the history of dreadlocks is pretty clear according to Ebony. They are from a people and culture that is despised by the KKK.

Cunningham says he might be moving away from Charlottesville soon to start a PhD. But, if any KKK rallies happen in the meantime, he says that he will be ready with a camera.

“For a few years now my camera has been attached to me… If the KKK come back, I’ll definitely be there,” he says.