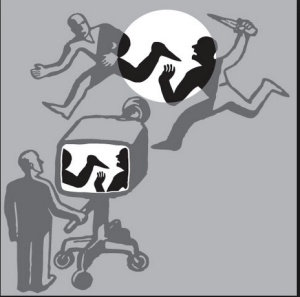 My little brother tried to calm things down but this soon escalated as everyone began jumping on him. It was at this point things turned for the worse as he and I fought this massive group of Caucasians consisting of both men and women. They were throwing glass bottles, crutches, bricks, and anything else they could find at us. As we continued to fight through this crowd of assailants to get away, more Caucasians came from out of nowhere and joined in brutally attacking us delivering closed fist blows and kicks to our bodies and head.

We began the fight of our lives. This MOB of around 20 Caucasians beat us until we were unable to move and left us laying in the park. My brother & I sustained multiple injuries. I was stabbed eleven times, eight times in the back & right shoulder, twice in the face & once in the head (which the knife was left lodged by one of the perpetrators). My brother was stabbed nine times, along his back, right side with one of the wounds causing him to have a punctured lung.

NO ARRESTS have been made and the only publicity this received was an irresponsibly written 97 word article in the Chicago Sun-Times riddled with incorrect information. If the roles were reversed and had this been a mob of African Americans attacking two Caucasians this would have garnered immediate attention and been plastered EVERYWHERE. We have contacted news stations & have not heard back from anyone. This further proves that America believes- BLACK LIVES DON’T MATTER. Please HELP US GET JUSTICE for this hate crime!

Please help us show that OUR BLACK LIVES MATTER! ‪

At this stage in US history it is hard to be shocked by racial violence or the media’s silence. Had this been a Black mob that beat, kicked and stabbed white siblings, the entire planet would have known about it within 24 hours. There would have been cries for justice from the highest levels of local and national government. National and international media would have been covering the story 24 hours a day — pretending to care.

This vicious attack brings to light much more than the fact that Black people are still under constant threat of racially motivated violence by both law enforcement as well as the general white “American” public. The attack highlights the need for Blacks (as well as Muslims and people of color in general) to move away from mainstream media (MSM) altogether.

In almost every instance of police violence and murders the MSM has initially come out stating verbatim the police departments narrative of events. It isn’t until hours or days later, until eye witness cell phone footage emerges, that we get to see things clearly. Even then, not until these videos are shared amongst friends and family  and then picked up by activists and “citizen journalists” into blogs does the MSM pay any attention.

One could argue that, had it not been for Mike Brown’s friends and neighbors who released photos and accounts of his murder

on social media that the uprising in Ferguson might not have happened. The same can be argued about the rebellion in Baltimore– if Kevin Moore did not film Freddie Gray being beaten and dragged away alive and with a broken leg to a police truck, the majority of people in the US would have never known. In both these situations social media and activist blogs kept us aware of the street battles taking place while offering direct commentary from participants on the ground, not the stale white pundits of the MSM (whose opinions are entirely irrelevant).

[BAI Note: The use of social media and activist blogs in these battles has also led to many critical projects including the formation of Copwatch groups: We Copwatch in Missouri, The Canfield Watchmen in Ferguson, We Copwatch Baltimore, We Copwatch Detroit and so on. ]

There is no use of relying on local, national or international MSM to get stories related to racism and state violence correct. If anything, the MSM is more dependent on street journalists to get their facts correct for them. This became obvious with the latest large scale Israeli aggressions against the Palestinians in Gaza. When the bombs began to drop on civilians in Gaza the MSM reported very little and what little they did report was coming directly from the Israeli’s. It was not until the entire world turned to Twitter and Facebook for accurate information, was the MSM forced to begin reporting in a coherent manner. The same happened in Ferguson. And in both instances once the media was forced to report with facts (and therefore– empathy), did the public turn back to them. Once the MSM had it’s audience back it quickly fell into it’s old ways: equating rocks thrown by rebels in Ferguson with bullets being shot at them by the state, they went right back to reading Israeli state propaganda as actually journalism– equating Hamas rockets with the leveling of entire city blocks by Israeli jets.

If we don’t recognize this pattern by now, we can only blame ourselves.

California Is Officially Pursuing Secession From The United States With #Calexit – Anti Media...