A woman living in Minneapolis, Minnesota was fatally shoot by police after she called 911 to report a possible assault in an alley behind her home Saturday night.

Justine Damond, 40, who originally hails from Sydney, Australia, lived with her fiancé in the city’s Fulton neighborhood, reported the Star Tribune.

Details of what happened that night are not exactly clear, but three sources with knowledge of the incident told the Tribune that two officers in one squad car pulled into the alley in response to the 911 call. Damond, unarmed and in her pajamas, went to the driver’s side door and spoke to the driver.

The officer in the passenger seat then pulled his gun and shot Damond – a yoga and meditation teacher – through the driver’s side door, the sources said.

“Two Minneapolis police officers responded to a 911 call of a possible assault just north of the 5100 block of Washburn Avenue S. just before 11:30 p.m. Saturday,” the state Bureau of Criminal Apprehension said in a news release that did not offer any extra details. “At one point, an officer fired their weapon, fatally striking a woman.

As expected, the officer’s body cameras were turned off during the fatal shooting, and the squad car camera did not capture the incident.

“The BCA’s investigation is in its early stages. More information will be available once initial interviews with incident participants and any witnesses are complete. … The officers’ body cameras were not turned on at the time and the squad camera did not capture the incident. Investigators are attempting to determine whether any video of the incident exists.”

Following standard procedure, the two officers involved in the shooting are on paid administrative leave.

“I am heartsick and deeply disturbed by the fatal officer-involved shooting that happened last night,” Hodges said.

“We have few facts at this point,” she said. “I want to know more. I call on the BCA to share as much information with all of us as quickly as they can.

“I have questions about why the bodycams weren’t on,” she added.

Zach Damond, 22, whose father Don was to set to marry Justine in August demanded answers as to why his soon to be step-mom was killed.

“Basically, my mom’s dead because a police officer shot her for reasons I don’t know,” Zach Damond said of the incident. “I demand answers. If anybody can help, just call police and demand answers. I’m so done with all this violence.”

On Sunday night the community held a vigil, where about 50 friends and neighbors held hands in a semicircle around the spot where Damond fell. Another 200 or more people watched from the sidewalk and street, standing in solidarity. 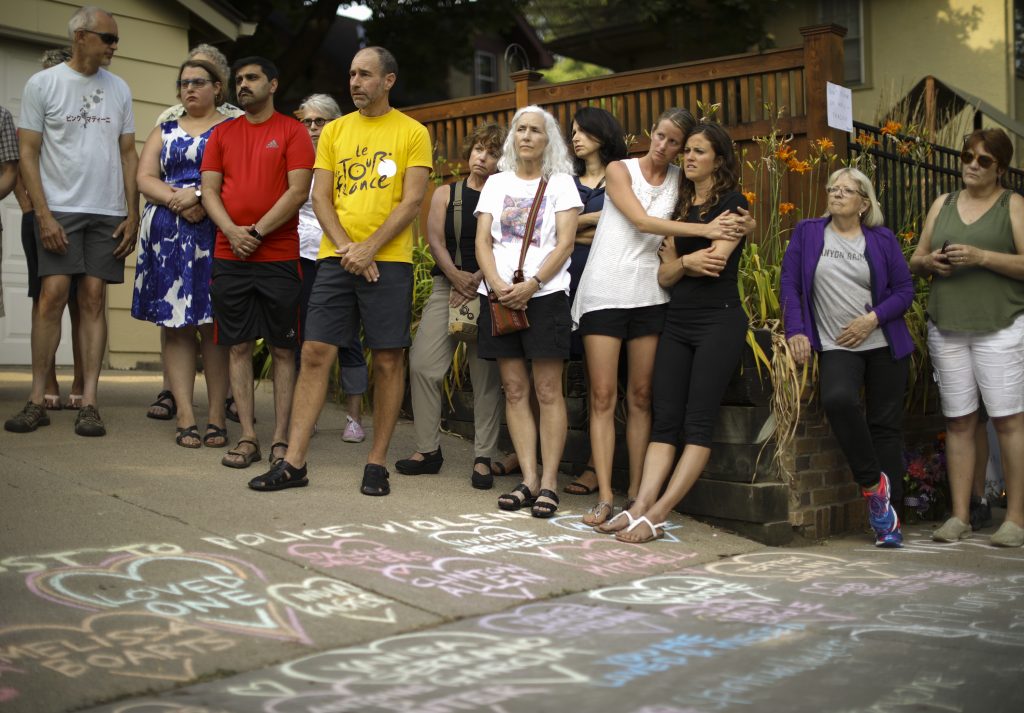 Leslie Redmond and other members from the local NAACP attended to “stand in solidarity with the family.”

Nekima Levy-Pounds, one of three mayoral candidates who attended the vigil said, “I hope and pray this is a wake-up call for the community to stop being divided by race and socioeconomic status … for treating everybody with respect.”

Keep The Treaties! Tipis Rise On The National Mall, First Americans Refuse To Be...