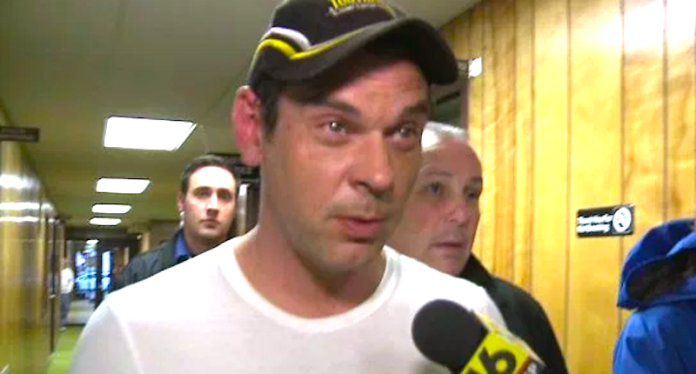 After accepting a plea deal in a child rape case, former Pennsylvania police officer David Turkos plead guilty last month to misdemeanor charges after being accused of raping two brothers over a seven-year period, three years after his father was sentenced for the abuse of one of the brothers as well. The story came to light when an older sibling of the brothers witnessed ” the older boy perform a sex act on his brother, who was 9″ and questioned where they would learn such acts.

The elder Turkos was sentenced to a mere 3months to a maximum of five years while David Turkos remains free on bond until his sentencing is determined.

The 44-year-old Turkos, a former Dupont police officer, threatened to hurt their mother and pets or take away their toys if they revealed the abuse.

One of the boys told police that Turkos choked him and used zip ties to restrain him during the abuse, and investigators said the former police officer held a hand over his mouth to muffle his screams.

“I hope you die — you’re a piece of crap,” Turkos told one of the boys, according to police.

The older boy testified during an April 2016 hearing that Turkos frequently pointed his gun at the brothers to frighten them, sometimes while on duty.

Turkos — who has a criminal record dating back to 2008 — agreed to plead guilty in June to misdemeanor corruption of minors charges after prosecutors agreed to withdraw two other charges, involuntary sexual intercourse with a child and indecent assault of a person under 13.

He remains free on $50,000 bond until his sentencing on Tuesday.

Joseph Turkos, the former officer’s father, also admitted to a misdemeanor count of corruption of minors in August 2014 after he was charged with sexually assaulting one of the same boys.

The elder Turkos was sentenced to three months to five years in state prison.

The abuse came to light after an older sibling saw the older boy perform a sex act on his brother, who was 9.

He was previously sentenced to six months of probation in 2008 for assaulting his stepson and ex-wife, whose arm was broken in the attack.

Believing that his authority as a police officer gave him free reign to abuse people at will without consequence  (as so often happens) he threatened his victims that it would be their word against his- and that as an officer of the law their attempts to seek justice would be futile. Sadly in the case of Turkos, it seems to be true as his ex-wife when seeking assistance from Dupont police about his abuse she was charged with filing false claims.

“You can’t do anything — I am the law,” Turkos told the woman, according to court documents.

His ex-wife filed a federal lawsuit accusing Dupont police of failing to properly investigate her claims that Turkos was violating a restraining order by repeatedly driving past her home.

Borough police instead charged the woman in 2012 with filing false reports, although a district judge later dismissed those charges.

Her lawsuit was dismissed earlier this year.

What are you hoping the sentencing for Turkos will be? If granted the maximum is it sufficient for the pain and suffering he has admittedly subjected upon the two young boys? How much blame should be placed on the police departments that did not heed to the crys of help from his ex-wife signaling that Turkos was a dangerous predator?

Photo Of Mitch McConnell In Front Of Confederate Flag Proves His Racist Pride –...

The Right-Wing Doesn’t Want To Talk About Christian Atrocities, So Let’s Talk About Them...