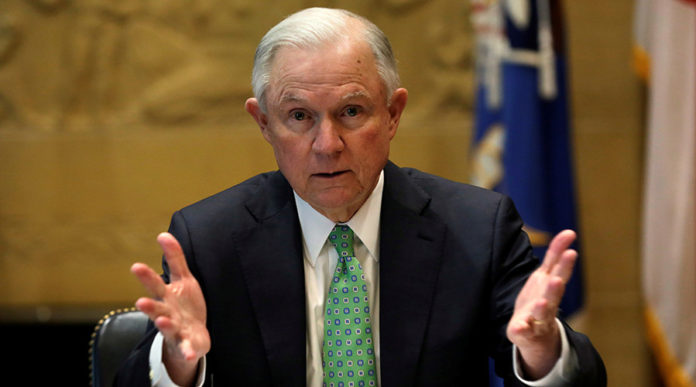 The Justice Department announced on Wednesday that it will be restarting the controversial “adoptive forfeiture” program, which allows police to steal the property of anyone SUSPECTED of a crime.

This particular federal asset forfeiture program, which is a very lucrative revenue source for local enforcement, was shut down by the Obama administration in 2015, but the Washington Post reports that in the 12 months it was stopped, state and local authorities took in $65 million that they then shared with federal agencies.

The new policy from Attorney General Jeff Sessions authorizes federal “adoption” of assets seized by state and local police when the conduct that led to the seizures violates federal law. Rosenstein said that the department is adding safeguards to ensure that police have sufficient evidence of criminal activity when property is seized. Property owners will receive notice of their rights within 45 days, which is twice as quickly as required by current law. Law enforcement agencies will be required to provide officers with more training on asset forfeiture laws, he said.

There are currently 13 states that have laws requiring a conviction before an individual’s property can be stolen, but under federal law a person’s home, cash, vehicles and any other property can be taken even if the person is not charged with a crime.

The local cops get to keep 80% of what they steal, and the federal agencies get their 20% cut of the loot.

There is evidence that forfeiture efforts tend to target poor neighborhoods, and although defenders of the practice claim it is necessary to disrupt major criminal organizations, a 2015 report from the Institute for Justice showed that between 1997 and 2013, 87 percent of Justice Department forfeitures did not require a criminal charge or conviction.

Additionally, after Holder stopped adoptive forfeiture in 2015, forfeiture revenues under the adoptive program dropped from $65 million to just $15,000 the following year.

Kanya Bennett, legislative counsel for the American Civil Liberties Union, told the Post that the new policy is “outrageous” and likened it to “policing for profit.”

“We are talking about people who have not been convicted of a crime and are often not given a day in court to reclaim their possessions,” Bennett said. “Civil asset forfeiture is tantamount to policing for profit, generating millions of dollars annually that the agencies get to keep.”

Sessions defended the legalized theft Wednesday at a meeting with representatives from Fraternal Order of Police, the National Sheriffs’ Association, the Major Cities Chiefs Association and other law enforcement officials who directly profit from the revived policy.

“Civil asset forfeiture is a key tool that helps law enforcement defund organized crime, take back ill-gotten gains and prevent new crimes from being committed, and it weakens the criminals and the cartels,” Sessions said.

“The problem is that we are not talking about criminals,” Bennett said. “We are talking about Americans who have had their homes, cars, money and other property taken through civil forfeiture, which requires only mere suspicion that the property is connected to a crime.”