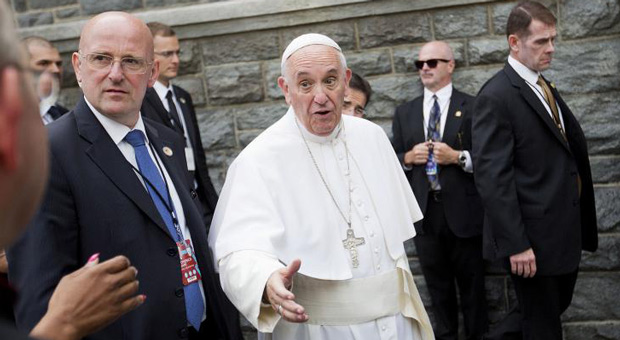 The suppressed statement from an Argentine junta whistleblower has recently emerged in which the eyewitness gives sworn testimony that Pope Francis is a “prime mover” in a huge global child trafficking network.

A former civil servant in the Argentine military junta, who is living in exile in Spain, claims that during the Dirty War of the 1970s, the Argentina-born Pope Francis, real name, Jorge Mario Bergoglio, engineered the kidnapping and trafficking of children of political prisoners.

The insider says he was personally involved in meetings between Bergoglio and senior junta members that secured the child trafficking networks using Catholic orphanages and religious bodies as covers.Speaking to ITCCS, a Spanish reporter who interviewed the former civil servant stated:

“This guy is genuine and has many names and dates, and notes from meetings.”

“Apparently, Bergoglio was promised the top spot in the Argentine church if he cooperated with the junta.”

“So it’s small wonder that as the Pope, he’s made it harder for honest Catholics to report child abuse, considering his own complicity.”In related news, according to ITCCS, a Vatican source claims that former Pope Benedict (Joseph Ratzinger) secured an agreement with Queen Elizabeth as head of the Church of England to conceal child rape in that body by adopting the provisions of the canon law “Crimen Sollicitationas”.

The agreement was made at Holyrood Castle in Edinburgh on September 16, 2010, during the Pope’s unprecedented visit to England that month, the first such visit in papal history.

The adoption of the notorious law by Queen Elizabeth was one of the conditions for the absorption of the Anglican church back into the Church of Rome.

It compels all Anglican clergy to subvert the laws of their own countries by protecting child rapists in their ranks, silencing victims and not telling the police of the crime.

Pope Benedict resigned on February 11, 2013, followed in August by the equally unexpected resignation of Vatican Secretary of State Cardinal Tarcisio Bertone, who helped to broker the Holyrood Agreement.

The cancellation of Queen Elizabeth’s novel trip to the Vatican in March 2013 soon after the appointment of Jorge Bergoglio as Pope Francis 1 was connected to the new Pope’s concerns that the Holyrood agreement might surface.

“Papa Francis was determined to keep the Holyrood deal secret at whatever cost because of his own ‘reform’ image and his plans to entrench Crimen even more completely in church law, which he did in his July 11 Apostolic Letter” states the Vatican source.

“One of his conditions for being made Pontiff was the dismissal of Bertone, who might link him to Holyrood. As a Jesuit, Il Papa knows you must feign one thing while doing another”.

In response to these latest revelations, the International Common Law Court of Justice in Brussels is actively proceeding with its next major case, in which its Prosecutors’ Office will seek the prosecution of Pope Francis, Jorge Bergoglio, on a charge of criminal conspiracy and aiding and abetting human trafficking.

The same Court issued a Legal Declaration on August 4, 2013, naming the Crown of England and the Roman Catholic Church as Transnational Criminal bodies under international law.