Home News US Senators Want To Make It A Federal Crime To Boycott Israel... 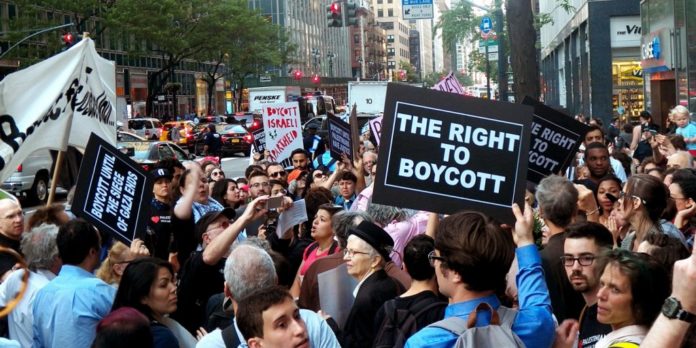 United States senators from both the Republican and Democratic parties want to implement a bill making it a felony to boycott Israel over the country’s horrific treatment of Palestinians.

On Monday, the ACLU issued a letter to the Senate opposing the proposed legislation. It was “drafted with the assistance of the American Israel Public Affairs Committee [AIPAC],” according to the Jewish Telegraphic Agency.

The Israel Anti-Boycott Act (S.720), which has a total of 43 supporters in the Senate (14 Democrats and 29 Republicans), seeks to broaden the the Export Administration Act of 1979 “to include in the prohibitions on boycotts against allies of the United States boycotts fostered by international governmental organizations against Israel and to direct the Export-Import Bank of the United States to oppose boycotts against Israel, and for other purposes.”

So basically, many US leaders want to make it a federal crime to boycott a country who continually violates international because of racism, participates in apartheid, and commits regular acts of terrorism.

The state of Israel maintains a military occupation of territories that were assigned to Palestinians by international law. Palestinian residents of the occupied West Bank are subjected to the discriminatory rule of a foreign army, while their Israeli neighbors enjoy the full rights of citizenship — a situation that many former Israeli officials have likened to South African apartheid. The United Nations has repeatedly held that Israel’s maintenance — and expansion — of settlements in the occupied West Bank constitutes a violation of international law. Nevertheless, the occupation persists, as it has for half a century. At present, there is no discernible, diplomatic path for bringing it to an end, reported NY Mag.

The bill in its current form would also make it illegal to even request information about boycotts against Israel, and violations would carry a minimum civil penalty of $250,000 and a maximum criminal penalty of $1 million and 20 years behind bars.

The ACLU points out that this puts the interests of an abusive foreign country over the first amendment rights of U.S. citizens.

“The impacts of the legislation would be antithetical to free speech protections enshrined in the First Amendment,” the ACLU wrote.

The organization also pointed out the contradictory nature of the proposed measure, explaining it “cannot fairly be characterized as an anti-discrimination measure, as some would argue. For example, the Civil Rights Act of 1964 already prevents businesses from discriminating against customers based on race, color, religion, and national origin. This bill, on the other hand, aims to punish people who support international boycotts that are meant to protest Israeli government policies, while leaving those who agree with Israeli government policies free from the threat of sanctions for engaging in the exact same behavior.”

“Whatever their merits, such boycotts rightly enjoy First Amendment protection.1 By penalizing those who support international boycotts of Israel, S.720 seeks only to punish the exercise of constitutional rights.”

If this bill is allowed to pass, it will punish American Citizens for using their first amendment rights and their political and moral beliefs to make decisions as a consumer.

Fake Sweden Expert on Fox News Has No Connection to Swedish Security – Anti...