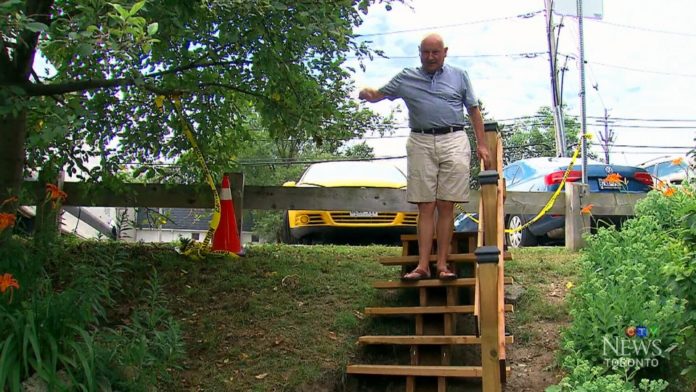 A Toronto man heard the ridiculous estimate the city had for installing a few steps to replace a dangerous, steep, rocky path in a park, and he took action.

Retired mechanic Adi Astl, 73, spent $550 building a set of stairs in his community park, but the city says he should have waited for a $65,000 city project to handle the problem. The city is now threatening to tear down the stairs because they were not built to city regulations, reported CTV News.

He decided to build the stairs after several neighbors fell down the steep path to a community garden in Tom Riley Park, in Etobicoke, Ont. Astl says his neighbors chipped in on the project, which only ended up costing $550, nowhere near the ridiculous $65,000-$150,000 estimate the city had estimated for the job.

“I thought they were talking about an escalator,” Astl told CTV News.

Astl hired a homeless person to help him and built the eight steps in a matter of hours.

Astl’s wife, Gail Rutherford, says the stairs have been a big help to people walking through the park. “I’ve seen so many people fall over that rocky path that was there to begin with,” she said. “It’s a huge improvement over what was there.”

Astl says many regular park visitors have thanked him for the stairs, especially after one of them broke her wrist falling down the slope last year.

“To me, the safety of people is more important than money,” Astl said. “So if the city is not willing to do it, I have to do it myself.”

City bylaw officers have taped off the stairs while officials decide if they should remove the stairs in favor of the previous, dangerous path, but Astl is not being charged with anything.

Mayor John Tory acknowledged that the city estimate sounds “completely out of whack with reality” on Wednesday. However, he says that still doesn’t justify allowing private citizens to bypass city bylaws to build public structures themselves, reported CTV News.

“I think everyone will understand that it will be more than $550,” he said on Wednesday. “We just can’t have people decide to go out to Home Depot and build a staircase in a park because that’s what they would like to have.”

Coun. Justin Di Ciano, who represents Astl’s area, said the spot seems safer with stairs than without them, so he’s asked his staff to leave them for now while plans are made for a city-approved upgrade that won’t cost too much.

“I think we all need to have a bit of common sense here,” he said.

Area resident Dana Beamon told CTV Toronto she’s happy to have the stairs there, whether or not they are up to city standards.

“We have far too much bureaucracy,” she said. “We don’t have enough self-initiative in our city, so I’m impressed.”

Terrorist Screams ‘Arab, you need to leave!’ Before Attacking his Victim With a Crowbar...

Calls Obama and Anyone Who Likes Him an ‘Absolute piece of sh*t’ – Anti...