Home News Did You Know That Government Documents Exists That Advocate Putting All Black... 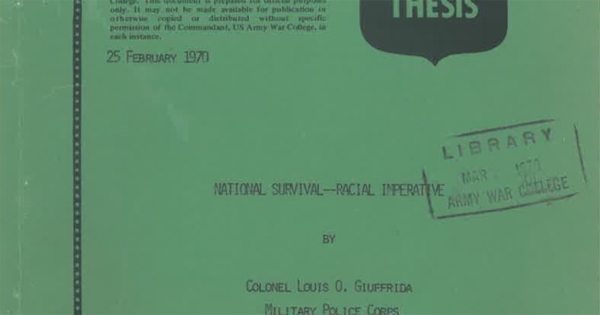 For years, there have been certain government documents floating around that suggested the mass interment of Black people in America. Documents such as the King Alfred Plan have long been dismissed by government officials as works of fiction because it cannot be traced back to a specific author or origin.

But recently a new document was discovered.

A thesis written by President Ronald Reagan’s FEMA director Louis Giuffrada at the US Army War College in 1970, entitled “National Survival-Racial Imperative” goes into elaborate details about the logistics of rounding up Black Americans to be placed in concentration camps.

This document did not use code words or euphemisms like many recent comparative documents and policies today. The National Survival-Racial Imperative thesis was very specific about targeting Black Americans.

Here is an excerpt for the thesis:

“In the past decade, the United States has had an epidemic of confrontations in which outbreaks of bitter racial violence have brought death and destruction and widened the gap between Negro and white. Inevitably, the rising tensions and mutual distrust have led to more violence and disruption.

For purposes of discussion let us assume that racial relations have degenerated to the point where armed militants embark on a massive violent attempt to immobilize the normal routine of a large city. The militants have occupied the city hall, taken over the mayor’s office, and are shooting at police attempting to oust them. An extremely militant Black Nationalist group has seized the main radio stations and has been calling on all sympathizers to arm themselves and “join the people’s revolution.”

As soon as the violence starts, there are similar, though not necessarily preplanned, outbreaks of violence in other cities across the entire nation. The level of violence has quickly exceeded the control capacity of the various state and local agencies. Federal troops have been requested and are already committed. Fierce fighting is taking place in several major cities and intelligence reports indicate the disorder is likely to spread still further. Large numbers of United States troops are still committed overseas and cannot be readily recalled to the United States. To further complicate the problem, white vigilante groups have surfaced and are taking independent counteractions against blacks — without too much attempt to discriminate between militant and nonmilitant…

Faced by mounting death and destruction, as well as increasing demands that he do so, the President reluctantly declares a state of national emergency and puts the entire country on a war basis. The previously murmured suggestion that all Negroes be locked up now swells to a roar. It is like 1941 again, except that now it is the “Black Peril” rather than the “Yellow Peril.”

In the extremely unlikely event that the government were to order the evacuation and detention of all blacks from actual or potential trouble spots, how and by whom would the order be enforced? What are the yardsticks for collecting, evacuating, and interning either militant or pacifistic minority groups; or dissident, potentially disloyal elements; or law-abiding citizens whose only offense is accident of color? Where would the internees be kept? … What would be done with the blacks in the Armed Forces and in civil service and in Congress? The task would be far too large for the Justice Department; it would have to be greatly augmented by military forces, primarily from the United States Army.

The government has historically had the right to protect itself. A government faced with prolonged, simultaneous, apparently coordinated riots disrupting the entire nation to the point where the government feared its very existence was in jeopardy would take many actions which in calmer times would never be considered. “The authority to decide whether the exigency has arisen, belongs exclusively to the President and … his decision is conclusive upon all other persons.” (Martin v. Mott, US Supreme Court 1827).”

Giuffrada’s views could be compared to those of National Security Council staffer Oliver North, who, the Miami Herald reported in 1987, devised a contingency plan for national crises that involved abandoning the constitution. As FEMA administrator, Giuffrida and North collaborated, and the agency supplied the staff for Ronald Reagan’s Emergency Management Preparedness Board, which featured North among its directors.

Oliver North wrote the infamous REX 84 Plan,which was basically patterned after Giuffrada’s Racial Imperative thesis.The Rex 84 Plan and other subsequent documents like it simply replaced the words “Negro” and “Black” with code words like “civilians”,”refugees” (remember how the head’s of FEMA and media outlets were referring to Black people during 2005’s Hurricane Katrina as “refugees”) and now “evacuees”.

The Racial Imperative also described how the media was used to demonize the image and public perception of Japanese-Americans during World War II in order to justify rounding them up to place them in internment camps.

Fast forward to today. Many media outlets are demonizing the public perception of Black Americans around the country, which in turn, is creating a nationwide resentment and justification for so many Black people being murdered in cold blood by white police officers. Almost everyday on news shows we hear propaganda rhetoric such as “Black people are the problem,” “Black thugs”,”what about Black on Black crime”, “Blacks are more violent”,etc,repeated over and over into the collective psyche of the dominant society.

The swift mobilization of police and military forces against African-American protesters and freedom fighters around the country recently, fall right in line with the logistics of the Racial Imperative thesis.

So the question we must ask the dominant white society,is if Black people are the “problem”, the what is the ultimate “solution?”

Black Men Are Lazy and the Cause of Poverty in the United States –...

Families Of Rays Are Being Shot As They Give Birth As Part Of A...