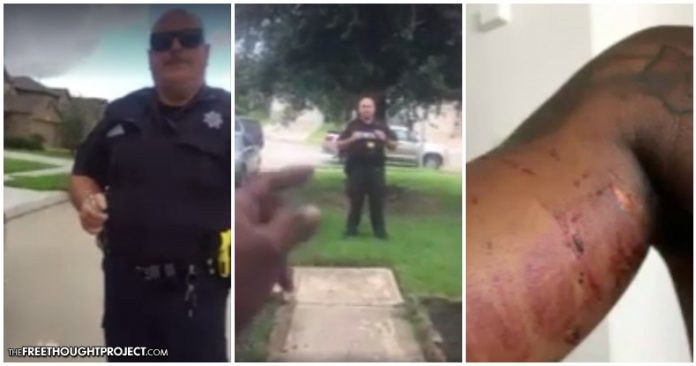 Video of a black teenager being harassed by an officer in Harris County, Houston, Texas, immediately went viral after being published online.

In the video recorded by Marvel Gibson, he says he was going door-to-door to distribute cards for his business of mowing yards while his crew was mowing a lawn in the area.

“When I saw you, you were going door-to-door-to-door,” the officer is heard saying in the video. Gibson responded saying he was distributing business cards. “Yeah, I’m putting my business cards out,” Marvin replied, holding a business card out for the cop.

“Well that’s what I’m trying to find out,” said the cop.

“Well that’s all you had to ask,” said the teen. “You see me cutting grass.”

“Well, let me see some ID,” the officer said. The video starts with the officer asking the teen to “step over here” next to a vehicle which appears to be their lawn work truck. Sounds of the lawn machinery can be heard in the background in the video as the other crew members seem to be working.

When the police officer asked him for an ID, Gibson said: “I don’t have it on me.”

Gibson asked why the officer was asking for so much of his information. The officer told him he was investigating what the teen was doing in the neighborhood.

“When an officer asks you for your ID, you’re supposed to provide your ID. You don’t have your ID. I don’t care what you’re doing,” the cop told Gibson.

Seconds later, Gibson is heard repeatedly asking for the officer’s identity card in order to note down his details. However, the cop grabs his handcuffs to arrest the teen and refuses to give his name to Gibson.

Gibson then left the place as he recorded the entire incident, warning the officer that he will drag him to the court.

“We’re cutting grass, sir. You’re harassing us,” said Gibson, who flashed his green business card in front of the camera, showing that he was only doing his job.

One of his friends, probably a crew member, can be heard saying “you can’t do this just coz he’s black.” Gibson is then heard repeating that he wants the cop’s name and his ID card.

The video cuts out halfway through the incident and then says “later that day” and goes on to show the same cop standing in front of Gibson’s yard in front of his home. The video shows the same teen filming from the front door of a house with the cop standing by a tree in the yard as police vehicles are seen driving in the background. Gibson can be heard saying “you are harassing me, get out of my yard.”

It ends with the officer walking towards the door while Gibson closes it, and then cuts to a picture of his chewed up arm. The injury is allegedly from after the video ended. Allegedly, the police broke into his house and attacked him with a police K-9.

This what the police who suppose to serve and protect do to black ppl now ah days…. ps thts me pic.twitter.com/gPpVHpw5wM