Home News Trump Has LOWEST Approval Rating Of Any U.S. President EVER In First... 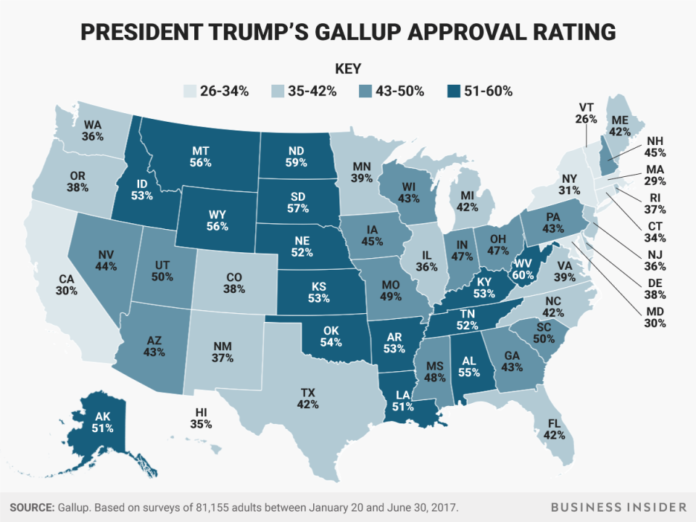 President Donald Trump’s historically low job approval numbers have caused trouble for the president’s already troubled ego, and now according to Gallup, Trump is the first U.S. president not to at least reach a 50% job approval rating in his first 6 months in office.

Trump finished his first 6 months with a measly 37% of Americans approving of the job he’s doing, according to Gallup daily tracking poll. While 58% of those polled said they disapprove.

Trump entered the White House with a record low job approval rating of just 45% after losing the popular vote in the 2016 election. There was only a brief moment in March where he climbed all the way back up to the 45% approval mark.

There’s a history in modern American politics of presidents experiencing a so called honeymoon period in the early months of their first term, which can result in inflated job approval ratings as large pockets of the country come together to support the newly elected commander in chief, according to AOL.

Because of his campaign filled with massive amounts of lies and bigotry, the American people were not willing to give him that grace period.

Trump is constantly bashing former president Obama in an attempt to make himself feel better about his shortcomings, but Obama’s approval ratings blew Trump out of the water.

For comparison, six months into former President Barack Obama’s first term he held a 56 percent approval rating. And the previous Republican president before Trump, George W. Bush, also sat at 56 percent at this same point, according to Gallup which has been tracking presidential approval ratings since Harry S. Truman.

67%  percent of Americans approved of President Jimmy Carter six months into his only term.

Trump continues to spread lies about polls in his never ending accusations of fake news whenever he disagrees with someone, even scientific facts.  After ABC and NBC reported on Trump’s historically low approval numbers, he said, “The two fake news polls released yesterday, ABC and NBC, while containing some very positive info, were totally wrong in General E. Watch!”