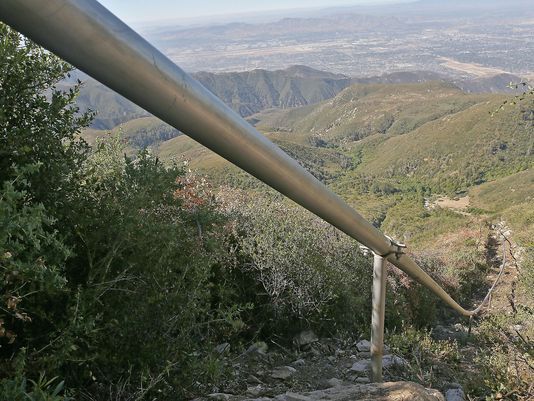 As the afternoon wore on, demonstrators kept arriving, infusing the protest with new energy and drawing more attention from passing cars. Many drivers honked or gave protesters the thumbs up. One even pulled over to ask for more information.

Loud cheers erupted from those assembled when a group of students from the University of Redlands arrived. Aaron Mandell, of the school’s chapter of Young Progressives Demanding Action, said he believed the issue was a bipartisan one which affected people statewide.

“The water is on National Forest Service land, it belongs to all people. This is everyone in California’s water,” he said. “And an international corporation is stealing it and selling it back to us for billions.”

He said his young progressives group hoped to influence local issues by building up public pressure around them, in part by attending events like Sunday’s demonstration and by petitioning local politicians and addressing local officials and residents at Redlands City Council meetings.

“We respect individuals’ rights to express their views and welcome open dialogue with members in the communities in which we operate,” Nestle Waters North America said in a statement. The company said Arrowhead Mountain Spring Water has been bottled from springs in the national forest for more than 122 years and those “operations for more than a century point to our commitment to long-term sustainability.”

Nestle’s use of water from the national forest has sparked strong opposition during the past two years. The issue prompted a federal lawsuit, an investigation of the company’s water rights claims by state regulators and a review of a Forest Service permit allowing the company to continue using its wells, pipelines and water collection tunnels in the forest.

A 2015 investigation by The Desert Sun revealed that the Forest Service has been allowing Nestle to continue drawing water from the national forest using a permit that lists 1988 as the expiration date. The Forest Service subsequently announced a review of the permit and in March 2016 released a proposal to grant the company a new five-year permit to operate its wells and pipelines in the mountains near San Bernardino.

Under the proposed management plan, water extraction would only be permitted when it’s demonstrated “that the water extracted is excess to the current and reasonably foreseeable future needs of forest resources.”

Nestle has objected to the Forest Service’s terms and last year said the agency’s proposal, as it stands, “would disrupt established water rights and the long-standing legal process of regulating water use” in California. The Forest Service, which does not charge any fee for the water withdrawn, has been charging the company an annual permit fee of $624. The agency has yet to establish what the annual fee would be under the new permit.

Nestle has insisted its operation isn’t causing any harm in the forest and has said it holds rights that are “among the most senior water rights” in California. The company’s water pipelines, horizontal wells and other infrastructure have been authorized under various Forest Service permits since 1929.

Three environmental groups sued the federal government in 2015 in an attempt to shut down the 4.5-mile pipeline that Nestle uses to collect water from the forest. Forest Service officials said Nestle’s 1978 permit, which was issued to predecessor Arrowhead Puritas Waters Inc., remains in effect while they consider the company’s renewal application. In September, District Judge Jesus Bernal backed that position in his ruling, saying the permit was still valid because the company’s predecessor in 1987 took the proper step of writing to the agency to request a renewal and didn’t receive a response.

The groups – Center for Biological Diversity, the Story of Stuff Project and the Courage Campaign Institute – appealed in November to the Ninth Circuit Court of Appeals.

In explaining the nearly three decades of inaction on the permit, Forest Service officials have cited a heavy workload of other priorities, wildfires and floods, a tight budget and limited staffing. Gene Zimmerman, the forest supervisor who was in charge at the time, retired in 2005 and has since done paid consulting work for Nestle.

Documents obtained by The Desert Sun in 2015 revealed that in the 1990s and early 2000s, there were discussions within the Forest Service about conducting a review of the permit and carrying out environmental studies, but those steps didn’t lead to action. When floods and mudslides in 2003 destroyed portions of Nestle’s pipes, the Forest Service allowed the company to rebuild and didn’t require a new permit.

Nestle says it collected about 32 million gallons of water from Arrowhead Springs in 2016. The water flows through Nestle’s pipeline to a roadside tank, where it is moved to tanker trucks and hauled to a bottling plant in Ontario.

Steve Loe, a former Forest Service biologist, has called for the agency to limit Nestle’s use of water from the national forest to protect Strawberry Creek and the wildlife that depends on it. In an email to Forest Service supervisors in March, Loe said limiting the amount of water Nestle takes would help groundwater levels recover after more than five years of severe drought.

“Everything we can do to reduce the take of groundwater will help with recovery and will help improve the health of the Strawberry Creek ecosystem, especially in the summer low-flow period,” Loe said in the email.

“It is becoming increasingly clear that the Forest Service has the authority and responsibility, in cooperation with the State, to manage and restrict the take of groundwater involved in this permit.

NASA SWAT Team Raids 75yo Grandma, Forces Her To Defecate Herself, To Steal Her...