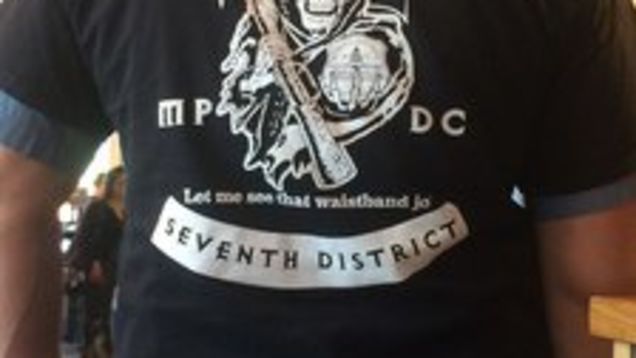 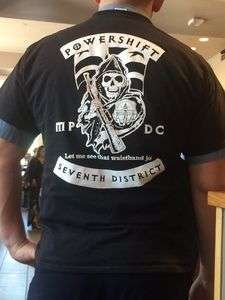 A Washington D.C. police officer was caught wearing a shirt with a white supremacist symbol on it while he was on duty, and he is now on “non-contact status” pending the department’s investigation.

Law4BlackLives, a group of lawyers who support the Black Lives Matter movement, told NBC Washington they have filed complaints with the police department after seeing the officer, Vincent Altiere, wear the shirt in D.C. Superior Court as well as in the community.

The t-shirt features a grim reaper wearing an MPD badge and holding a rifle. The DC flag is in the backdrop, and the words “Powershift” and “Seventh District” surround the grim reaper. In place of the “O” in the word “powershift” is a Celtic cross, a symbol used by white supremacist groups such as the Ku Klux Klan.

In smaller letters below the reaper, the phrase “Let me see that waistband jo” appears. According to Law4BlackLives, that is short for “jump outs,” a more aggressive form of stop and frisk that targets men of color in searches for weapons.

So the shirt not only associates him with the angel of death, but also suggests targeting minorities.

“This shirt is offensive and indicates systemic bias in the policing of people of color,” Law4BlackLives said in a statement. “White supremacy and insinuated threats of death should never be associated with or tolerated in police departments who are sworn to protect and serve.”

Police Chief Peter Newsham said, “This is disgraceful and does not represent the hard working and committed officers of the Seventh District.”

This is disgraceful and does not represent the hard working and committed officers of the Seventh District. https://t.co/7FfJfuGW0L

In a separate statement, the department said, “We understand the trust of the community is critical to our ongoing work and take seriously any incidents that may undermine the confidence the community has in our members.”

Washington Post reporter Radley Balko, tweeted that defense attorneys have seen other officers wearing the shirt.   This means it is not an isolated incident and there is a much bigger problem than just 1 rogue racist int he 7th district.

A petition to have Officer Altiere fired has over 1700 signatures with a goal of 2000.

Before and After Photos of Houston Underwater Are Going Viral