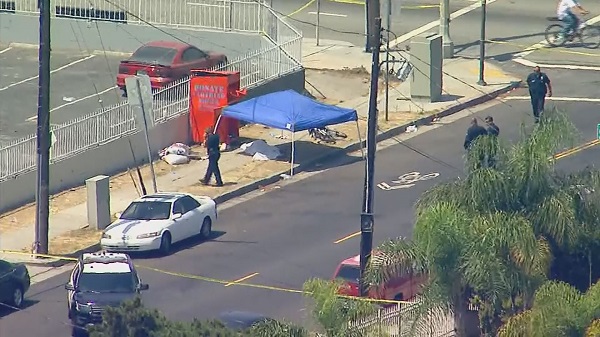 A man died Friday after getting stuck in a clothes donation box in a South Los Angeles neighborhood.

A neighbor discovered the man around 10 a.m. Friday morning and called 911 for help, reported  ABC7.

“He wasn’t moving so I said, ‘Oh, wow. Maybe I better call 911.’ So that’s what I did. So by the time paramedics came, they tried to revive and get him out, but it took like 30 minutes to get him out. So they had to go and get these electric saws to get him out,” she said.

Paramedics tried to revive him, but he was already dead. Some neighbors said they have seen him around there before, taking clothes and collecting bottles and cans on the street.

“Everywhere, clothes are pulled out of there. That could have happened to anyone – not just this man. This company, whoever decided…I guess they were trying to help the community, but all they did was add more junk to the community,” Jackie Love said.

Another resident weighed in on the donation box:

“That’s what makes them go digging through here – to get stuff either to sell it for food or get clothes for their own family. I can’t fault them for that. But again, this needs to be restructured because that’s someone’s loved one. I just hope it gets out to other people so this doesn’t happen to them,” Cheryl Johnson said.

No one seemed to know who put the box there. They do no even know if it is someone trying to help or just someone looking for free clothes.

There is no company name written on the box. ABC7 tried contacting a phone number on the side of the box, but the line was disconnected.

“Racist Thug” Gets 47 Months In Jail After Kicking Pregnant Muslim Woman In Stomach...