Home News D.C. Cop Under Investigation For Wearing a White Power Shirt While On... 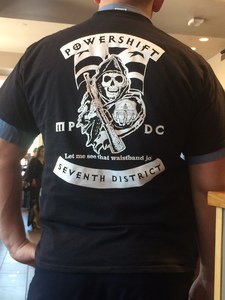 People of color are continuously charged and convicted of crimes at a disproportionate rate to that of their Caucasian counterparts, and if there was still any question that systemic bias exists in the policing of people of color- this next story should shed some light on the issue at hand.

Vincent Altiere- an officer with the Metropolitan Police Department in Washington, D.C., has been placed on “non-contact status” pending the department’s investigation on whether or not he wore a shirt with a racist symbol on it while he was on duty. “Law4BlackLives, a group of lawyers who support the Black Lives Matter movement, filed complaints with the police department after seeing the officer, wear the shirt in D.C. Superior Court and in the community.” It is important to note, that when actively policing and serving the taxpaying public, officers should have no bigoted views in order to serve the community fairly, safely and justly.

In a photo taken by the group, the t-shirt features a grim reaper wearing an MPD badge and holding a rifle. The DC flag is in the backdrop, and the words “Powershift” and “Seventh District” surround the grim reaper. In place of the “O” in the word “powershift” is a Celtic cross, a symbol used by white supremacist groups such as the Ku Klux Klan.

In smaller letters below the reaper, the phrase “Let me see that waistband jo” appears. According to Law4BlackLives, that is short for “jump outs,” a more aggressive form of stop and frisk that targets men of color in searches for weapons.

“This shirt is offensive and indicates systemic bias in the policing of people of color,” Law4BlackLives said in a statement. “White supremacy and insinuated threats of death should never be associated with or tolerated in police departments who are sworn to protect and serve.”

MPD’s Seventh District covers much of Southeast D.C. east of the Anacostia River, including the communities of Anacostia and Barry Farm.

In a tweet on Friday afternoon, Police Chief Peter Newsham said, “This is disgraceful and does not represent the hard working and committed officers of the Seventh District.”

This is disgraceful and does not represent the hard working and committed officers of the Seventh District. https://t.co/7FfJfuGW0L

In the past, the D.C area has had a lot of struggles in dealing with public opinion and policing in their community.  The public display of racism by an officer on active duty only reinforces any negative views the public has with respect to law enforcement and will only exasperate any racial tensions that exist as well as the lack of trust the community has in their police officers.

In a separate statement, the department said, “We understand the trust of the community is critical to our ongoing work and take seriously any incidents that may undermine the confidence the community has in our members.”

Washington Post reporter Radley Balko, who tweeted MPD’s statement, said in his tweet that defense attorneys have reported seeing other officers wearing the shirt, so it is likely this is not an isolated incident, and that speaks to a bigger problem.

Statement abt officer’s offensive shirt: We take seriously any incidents that may undermine the confidence the community has in our members. pic.twitter.com/ZsnEqUl46w

Eugene Puryear is a member of the Stop Police Terror Project, one of the groups responsible for putting out a petition to have Officer Altiere fired. The petition currently has more than 1,600 signatures.

Puryear told DCist, “It’s three different levels of problems that are highly offensive and inappropriate. It suggests support for really problematic ideologies. It’s almost like they’re deliberately taunting the community about their fears and concerns they have about their constitutional rights.”

“In their own words, [MPD] officers seem to be associating themselves with the angel of death,” Puryear added. “That’s just totally outrageous especially in the context of police violence that they appear to be celebrating that they can take people’s lives.”

Charles Allen, Ward 6 council member and chair of the judiciary and public safety committee, told DCist, “If reports are accurate, the conduct is flat-out unacceptable. I was assured by the Chief this is being taken seriously. In the District, community policing must be at the core of our approach to public safety. I hold all members of the Department to the highest standards, and incidents like this one are stark reminders we still have work to do to build trust and ensure that the District is a safe place for all.”

Do you think the matter is being blown out of proportion, or has Law4BlackLives made the appropriate strides in seeing that justice is served in this case? Do you think too much is being read into what the officer was wearing while on shift, or do you think concerns are legitimate? Share your thoughts in the comments below.