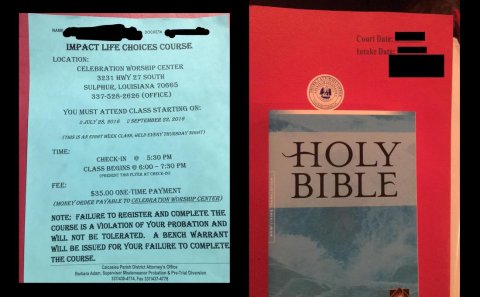 If you are a first-time drug offender in Sulphur City, Louisiana; in order to obtain probation, you may be subjected to cruel and unusual punishment via unconstitutional via forced attendance to a Christian program called “Life Choices” offered by a local church. Sulphur City Court Judge Charles Schrumpf hands down these sentences in defiance of the government by failing to remain neutral by endorsing religion when it is a clear violation of the separation of church and state.

The First Amendment’s Establishment clause mandates that the government cannot in any way promote, advance, or otherwise endorse any religion, a principle well-established in federal jurisprudence. That bright dividing line between church and state also applies to court orders and terms of probation that require participation in religious programs, as can be seen in a line of cases decided in federal appeals courts over the past 20 years.

The fundamental principle behind Establishment cause jurisprudence is, as noted in Lee v. Weisman (1992), that government must remain neutral toward religion because “the preservation and transmission of religious beliefs and worship is a responsibility and a choice committed to the private sphere.”

Not in the court of Sulphur City Court Judge Charles Schrumpf, though. As the Freedom From Religion Foundation noted in a July 20 complaint letter to Schrump and probation officer Barbarba Adam, Schrump’s way of handling those cases is completely unconstitutional. Probationers in the program receive a Bible and have to complete homework that involves reading passages from scripture, as well as from the evangelical text “Made to Crave.”

The most disturbing part of the deal, however, that if someone did not feel that the religious aspect of the program was appropriate and did not want to participate on these grounds- they run the risk of the revocation of their probation. “According to the letter, probationers who objected to participating in the Life Choices program because of its religious content have been told by Probation Officer Adam to “take it up with the judge” in a threatening tone.” The program itself was also a veiled attempt to “save” individuals or convert non-Christians.

According to the blog Friendly Atheist, which spoke with a person ordered to take the course, the course teacher said that while attendees weren’t required to be Christian, that was the ultimate goal, and Probation Officer Adams responded to an attendee who said he was an atheist by saying, “We’ll see how you feel after eight weeks [of class].”

The foundation is demanding that the practice be ended and that if the court is going to impose drug treatment or counseling as a condition of probation, it does so through programs that are “medical and secular, not religious in nature.” At this point, the foundation is not threatening a lawsuit; only seeking notification “of the appropriate actions taken by the Court and the Probation Office to protect the right of conscience of probationers in their care.”

There is no word yet on whether Judge Schrumpf will heed the foundation’s complaint and restore the Constitution in his court or whether he will double down in defiance. In the meantime, if you get caught with drugs in Sulphur Springs, only god can help you.

Do you agree with the Freedom From Religion Foundation’s stance that the implementation of this program is un constitutional? Do you think Judge Schrumpf should face disciplinary action for imposing such sentences if so? Share your thoughts in the comments below.

EVERYTHING Cop Owns Is Seized To Pay Back Man He Paralyzed – Anti Media...

Colorado To Use Pot Taxes To Treat Drug Addiction — INSTEAD Of Prison –...