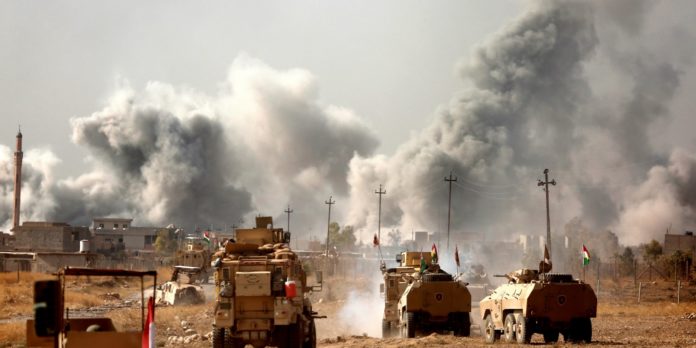 With questions being raised about U.S. loyalties in the middle east, it seemed like a bad time to target a militia group fighting against ISIS. The U.S. didn’t seem to care though, and they bombed the Iranian-backed group, coordinating with an ISIS attack against the anti-ISIS militia.

Sources in Syria and Iraq reported Tuesday that at least 40 militiamen from a powerful Iraqi Shiite militia were killed in a U.S.-led coalition attack across the border with Syria reported Haaretz.

Newsweek reported that as many as 85 of the people fighting ISIS were also injured from the U.S. airstrike.

The deputy head of the Iranian-backed militia known as Kattaib Sayeed al-Shuhadaa blames U.S. forces for the assault.

As commonly happens after the U.S. kills civilians or those fighting against terrorists, the spokesman of the U.S.-led coalition, Army Col. Ryan Dillon, dismissed the allegation.

The militia’s Ahmed al-Maksousi says U.S. forces hit their base in Syria’s Jamouna area with artillery early on Monday. That followed by an on-the-ground attack by the Islamic State group, which was seemingly coordinated with the U.S. strike.

Sky News in Arabic quoted sources in the field who reported that it was an airstrike that hit the sites, saying it targeted a company of Al-Hasd al-Shaabi fighters, south of Sinjar. The area is about 12 kilometers — around 7.5 miles — from the Iraqi border.

The Iran-supported militia is also taking part in the fight against the Islamic State in Iraq and supports the Iraqi government forces.