Home News WATCH: “Why Did They Shoot Me?” – Unarmed Student’s Last Words as... 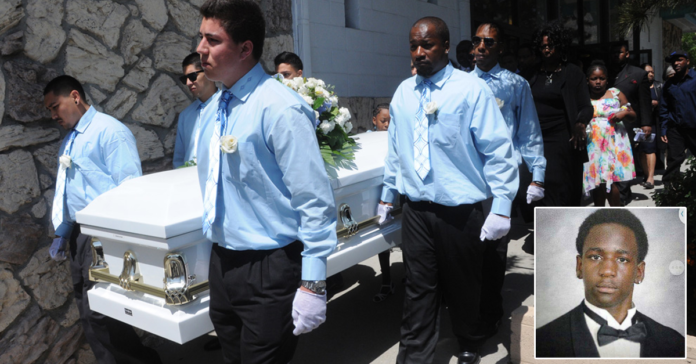 He was the apple of her eye. In so many ways, she says, she grew up with him.

“He changed my life. He made me want to be a better person.”

Nineteen years later, he was murdered by police a week after the birth of his younger brother. His grieving mother went to identify his body in the same hospital where she had given birth only days earlier.

The tomorrow that never came

Her story feels like something from the movies, unfortunately it is a reality so brutal it has left an entire community shaken.

On 24 March 2012, the Azusa-resident dropped her son off to his father’s place. Her former partner lived about 25 miles away in Pasadena.

She said goodbye to him and, ironically, said: “I love you and I’ll see you tomorrow”

When Anya returned home, she looked at the newspaper on her iPad and read about a police shooting of an African-American young man in Pasadena; it never crossed her mind that the victim could be her son.

The report said the young man who had been murdered was 20 years old.

Around four hours later Kendrec’s father, Kenneth McDade, called and said the boy had not turned up at his apartment. Anya did not think much of that either, her son was an American football player in high school and so she assumed he would have gone to a game that he forgot to mention to his parents.

She tried calling his phone, but he didn’t pick up.

A while later his father called up again, this time to confirm that he knew his son’s whereabouts but he had other information too – a parent’s worst nightmare. Kendrec had been shot dead.
“Why did they shoot me?”

Just before 11 PM someone reported that a backpack and laptop had been stolen from them. The man said that he was held at gunpoint, he later admitted this was a lie in order to get the cops to respond more quickly.

Kendrec was at Orange Grove Boulevard when the burglary took place.

Police officers Matthew Griffin and Jeffrey Newlen saw him and thought they had one of the suspects. Hence, started a chase that eventually culminated when Newlen decided to pursue the teenager on foot.

At one point the boy started running towards the police car. Griffin saw him approaching and opened fire, he shot Kendrec four times. When the other officer heard the commotion, he assumed his partner was being shot at, so he too fired at the victim thrice.

Kendrec was shot from front and behind by both officers.

Then Griffin left his car without making sure that they had applied the brakes properly.

It started rolling backwards and almost hit the teenager who was lying face down on the street. As Kendrec was breathing his last, the officers handcuffed him.

When he was being driven to the hospital, he asked the ambulance driver: “Why did they shoot me?”

Five minutes past midnight Kendrec was proclaimed dead. A young boy who had been alive just one hour ago was brutally murdered because a couple of cops had made an error in judgment.

Neither cop thought it was necessary to switch on the emergency lights or the siren. A judgment that is quite curious in light of the fact that activating the lights and siren automatically turns on the in-car video camera.

Despite claiming that they felt threatened by Kendrec – who we now know was unarmed – they did not call for backup, did not use a loudspeaker to warn him, and even decided not to radio in the fact that they were chasing who they believed was an armed suspect.

Even more peculiarly, officer Newlen decided to chase after the teenager on foot; a risky endeavor for anyone who believes that there are weapons involved.

Anya says she cried every day for more than two years mourning the death of her son. She handed over the baby to her niece because she just couldn’t take it, she lost weight and her hair started to fall out.

She went and talked to her son at his grave every day.

One day around three months after Kendrec’s death she had to be forced to leave the graveyard because she just couldn’t cope with leaving her son behind.

To help her gain closure Kenneth suggested seeking out legal advice. An out-of-court settlement was reached for the officers’ hideous crimes. The city paid $850,000 to Anya and her attorney.

However, her struggle is far from over.

She still thinks she does not know the full truth about her son’s death.

Anya is not hopeful that she will get an answer any time soon, if ever.

“They’re trying to sweep it under the rug.”

If You See THIS Label On the Fruit Do Not Buy It at Any...