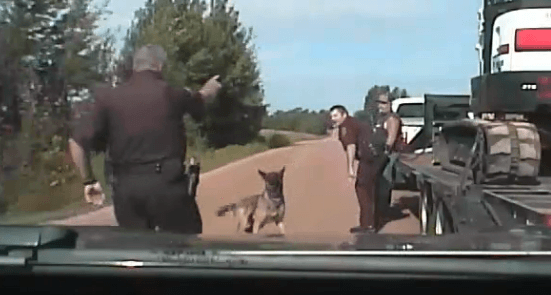 Innocent 70-year-old man Klyde J. Gebelein was viciously attacked by police and their K9 unit during a routine traffic stop. He had no criminal record, did not break a law and posed no threat to officers, yet he is now permantly disfigured and he is taking the cops to court.

Marathon County Sheriff’s Deputy Troy Deiler pulled over Gebelein claiming that he needed a DOT sticker because he was dragging an excavator for business purposes.

Gebelein has since filed a lawsuit against the Marathon County Sheriff’s Deputy for the horrific assault he endured on August 6, 2015 — all of which was captured on police dashcam.

On that fateful day, Deputy Deiler pulled over Mr. Gebelein because his trailer, for hauling his excavator, lacked the proper stickers from the Department of Transportation. Deiler claimed that because Gebelein was using this trailer and excavator to earn income that he was required to pay the DOT — for a sticker. But Gebelein was having nothing of it.

Clearly agitated that Deiler kept pressing him over this extortion fee for a license, Gebelein had enough and left.

If we look at this situation objectively — outside of the statist paradigm — we see a man driving away from an armed robber who detained him and demanded he pay protection money for the right to earn income.

Sadly, however, as the police see it, this man was fleeing an officer, resisting an officer and operating commercial motor vehicle without a license — so they claimed the right to enact violence against Gebelein.

After realizing that the officers weren’t going to stop chasing him, Gebelein finally stopped his vehicle. He then simply got out and walked up to the officers to talk to them like a human being. However, because they are police and perceived Gebelein’a actions as criminal activity, they did no talking — only violence.

The dashcam footage can be seen below: